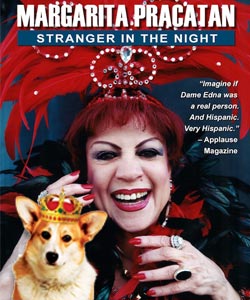 It is some time since we have seen MS Pracatan on our screens,so imagine the prospect of catching her performance at Manchester's Radisson Hotel on Peter St as part of Pride 2012.
Catapulted into the spotlight some years ago by TV's Clive James,she captured the nations imagination with her wonderful Cuban accent,coupled with her unique renditions of popular songs.
The packed audience last night were treated to both.
The almost entirely LGBT audience, were treated immediately to Lionel Ritchie's 'Hello',which at the time,became one of her signature songs.Others followed including a selection of Gaga,Sinatra and ABBA hits,all in her very own 'Style'..The evening was further punctuated by the use of some clever visuals,which had the crowd in stitches.
Her demanded encore was then followed by her being swamped by adoring fans for photographs.All of which he took in her stride,laughing and smiling throughout.
This true 'one off'is quite a lady and worthy of your attendance.Sunday night is her last performance at the Radisson as part of the Pride Fringe programme.
Congratulations to Kevin Healey and his team at The Radisson Blu who served a wonderful supper too.