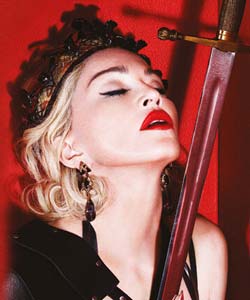 Madonna at the O2

Madonna has had a bit of a battering in 2015. The year started off pretty bad with her album leaking, lukewarm reception to the lead single and of course that incident at the Brits. She could have been forgiven for retreating to one of her many homes and licking her wounds, but our Madge has never been one to shy away from a challenge and instead she did what she does best, she went on tour.

The Rebel Heart Tour kicked off in Montreal way back in September and has made its way across North America and most of Europe before hitting our shores.

The scale is large, a catwalk coming out into the audience with a heart at the end and a cross in the middle, the Rebel and the Heart although the overall phallus nature is lost on no-one, least of all Madonna.

She comes out to album track Iconic complete with Samurai warriors, clearly meaning business. Madonna’s live shows, by their nature, are shocking, the pointy bras, crucifixion scenes and more lewd gestures than a Saturday night out in Blackpool so what is left? Yes there are the dancing stripping nuns and a Last Supper scene where the diva herself is on the menu but the truly shocking thing about the Rebel Heart Tour is this is an emotionally stripped Madonna.

She presents some of her greatest hits in simple forms, songs she hasn’t touched in decades such as True Blue and Who’s That Girl as well as hits like Holiday, Like A Virgin, Material Girl, Music, Deeper and Deeper and La Isla Bonita.

As a veteran of Madonna tours (this is my 8th) they have been sophisticated pieces of performance art and political comment, the Rebel Heart Tour is a pop concert with the Queen in fine form, laughing and joking with the crowd, demanding singalongs and getting into her groove. She seems incredibly relaxed and determined to simply enjoy herself which is great to see and infectious to the crowd.

The highlights of the show are when she is down the end of the stage with her guitar. Although the last act where she channels Josephine Baker and the 1920s is breathtaking, excepting a very uncomfortable Stella McCartney who was chosen to be the evening’s Unapologetic Bitch, Graham Norton did a far better job the previous night, river dancing for all his worth. It remains to be seen who will be chosen for the forthcoming Manchester date which looks to be sold out, if you haven’t already got a ticket, you need to beg, borrow or steal to get one and I will see you there!