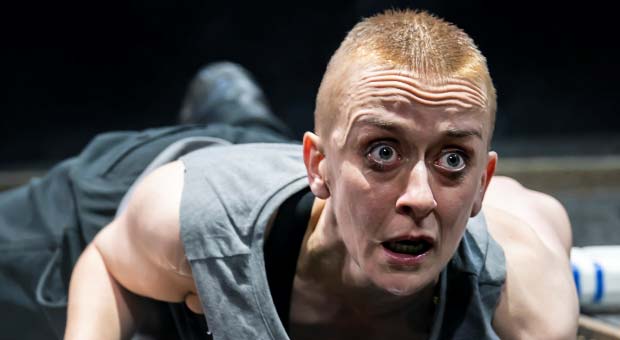 Pulling the audience into an unsettling world of power and desire, director Christopher Haydon’s contemporary version of Shakespeare’s darkest tragedy MACBETH sees actor Lucy Ellinson take on this iconic title role at the Royal Exchange Theatre. Ellinson is outstanding in her role as she searches for the ever-criminal hunger for power and this is matched with a dark and action-packed production as we follow Macbeth’s battle with her overwhelming ambition. As her thirst for power becomes all-consuming, she dangerously spirals out of control with violent and bloody consequences for all. Indeed, she explores well the ‘toxic masculinity’ of Macbeth’s rise to power and it is interesting to see this uncoupled from male identity itself. Rachel Denning provides a lighter and humorous touch in her portrayal of the ‘porter’ role as we hear the foreboding knocking on the door and it is in the second half where we see Paul Hickey come into his own with a strong portrayal of Macduff, the man that was not of woman born and therefore able to bring about Macbeth’s demise.

Christopher Haydon and designer Oliver Townsend have done extremely well in interpreting this highly charged political thriller exploring what happens, when in a split-second, you decide to act upon your darkest ambition. A particular stand out scene is the banquet scene, balancing the surreal with horror with a very clever use of switching places show the appearance and reappearance of Banquos ghost.

Much is explored in this production around cross-gender casting. In the long history of casting women in male Shakespeare roles, there are remarkably few Macbeth’s and Lucy Ellinson is superb. However, in this production the passion between Macbeth and Lady Macbeth that is just as important as the hunger for power and is pivotal to the story and so easily recognised as one of Shakespeare greatest couples, seems lost and irrelevant. Having two women together could have explored the endless possibilities in this relationship. Having no limits, no compromises and no restrictions, However, the production focuses on the concept of female warriors and this seems detrimental to the relationship often explored between Macbeth and Lady Macbeth.

The production runs from 13 September – 19 October in the Theatre.