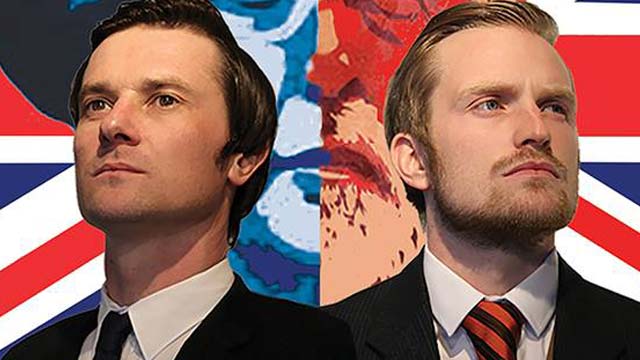 Loving Her, Loving Him at Kings Arms

A mix-up over hotel rooms in Blackpool during the 1975 Conservative Party conference leads to an affair that lasts through Thatcher, the AIDS crisis and Section 28.

The dying embers of New Labour sparks a relationship that comes up against the financial crash, smartphones and the rise of the millennial.

Loving Her, Loving Him is a breathtaking new play by LGBT History Month’s Playwright in Residence Stephen M Hornby which addresses the complexity of gay love and life through two very different eras.

The setting is a series of vignettes through time in hotel rooms up and down the country, with a political backdrop where big themes are presented with the intimacy found only between two lovers meeting in a bedroom.

It is a show of two halves.

Act One is strong, powerful and moving. It takes us through the gay community’s darkest of times with humour and pathos. When the spectre of HIV/AIDS finally comes out of the shadows towards the end of the act – as it always had to in a drama set in this era – it does so in a way that avoids the cliché that this well-trodden path often leads to.

But the stand-out moment of the play is a section set just after the IRA bomb explodes at Brighton’s Grand Hotel during the 1984 Tory conference. The main characters, Anthony and Charlie, face the potential of death, or exposure of their affair – and it’s unclear which they would consider worse. This fear leads to honesty, humour, and love in a way that is so authentic it breaks the heart.

Act Two is more difficult. It brings us to more recent times. No longer does a married Tory MP have a clandestine gay affair with the spectre of death – whether through HIV or IRA – lurking in the shadows, as the battle for equality rages outside the bedroom door.

Instead we are faced with the challenges of gay men adjusting to a new reality where they don’t need, so much, to fear being gay. In a world where it appears men of principle quickly sell out to personal gain and political expediency. It could easily become rather tedious, rather pedestrian, rather – dare we say it – straight.

But Hornby avoids this by ramping up the humour, scandalising us with innuendo about current politicians, introducing a new character to change the dynamics, and giving us Andy Burnham as Prime Minister, who has successfully moved parliament to Manchester – something which plays well with a home crowd, but goodness knows what they’ll make of it when the play moves to London (as it surely must).

Throughout the second act, the key themes of love and betrayal, hope and hypocrisy remain. Hornby manages to take the weaker source material – because, let’s face it, contemporary times are so much more boring than the 80s – and still delivers.

The performances are remarkable.

As Charlie, Dean Gregory is seductive and compelling. He seduces the audience as much as he does his lover Anthony, with a complex performance where a veneer of confidence and arrogance is scratched away to expose a heart of fragility, confusion and pain.

Joel Parry’s Anthony is a more subtle character, but one that is almost a mirror image of Charlie. Parry captures Anthony’s growing confidence and comfort in his own skin well. But Parry is also responsible for one of the drama’s real highlights. Each scene is bookended with a lip-synch of a relevant song, and extracts from political speeches from the time. Parry is responsible for those speeches, and his mimicry of the likes of Thatcher, Gordon Brown, and Andy Burnham is both hilarious and – frankly – uncanny.

Ethan Martin’s Hugo is introduced in the second act to create a kind-of love triangle, and to move the story on. He could easily be more device than character, but Martin’s performance is solid, entertaining and human.

In a nutshell: Loving Her, Loving Him is a beautiful, moving and powerful piece of intimate theatre that takes us on a rollercoaster ride from 1975 to today and beyond. At times hilarious, it’s often heartbreaking with strong performances and great writing. It deserves a bright future on a bigger stage, so it’s worth catching now in the intimate environment of the King’s Arms.

Loving Her, Loving Him is on at the King’s Arms, Salford, until Saturday 9 September.

Tickets are available from: Here.