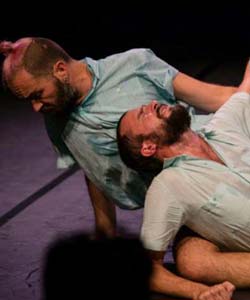 “Celine Dion”. Who would have thought that someone repeating the Canadian diva’s name repeatedly to the tune of her Titanic super smash would have a room full of people in stitches? Welcome to the world of Los Microphonos.

Sometimes uncomfortable viewing as they stare you out in the closed confines of the studio at the Royal Exchange, it was fascinating to see audience members collapse into tears of laughter, at different times with different triggers. It is hard to convey the atmosphere Spanish performance artists, Jorge Dutor and Guillem Mont de Palol, portray by simply repeating names of popular culture icons. If you have experienced this incredibly clever comedy, you will raise a smile every time you hear “Ah Freak Out” or someone refer to “Nicole Kidman”. Even the performers themselves are not immune, struggling to fight giggles.

If you haven’t experienced this crazy comedy, next chance you get, grab it.