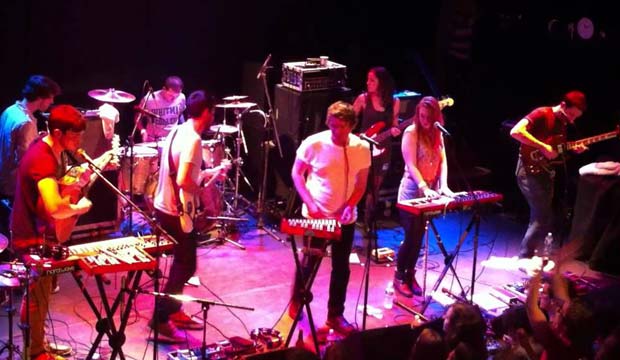 Rounding off their short 2017 tour in Manchester, Los Campesinos! took to Club Academy for an intimate and enthusiastic gig; a firm reminder that, even after ten  years, the band still has what it takes to put on a brilliant set.

They played songs from their entire collection – fan firm favourites in By Your Hand, Avocado Baby and an audience-decided encore of You! Me! Dancing!.  LC! had been influential in my formative (read: ‘awkward teenage’) years - throwing out catchy indy bops with lyrics that worm their way into every crack and crevice of your being.  There are few people I know who don’t recognise their name but do recognise their music, and in doing so are instantly reminded of the same awkward times of their lives.  Perhaps then this makes it a little more difficult to be objective, but there wasn't a song that LC! played that all of the crowd weren't throwing themselves around silly to - probably just like their sixteen year old selves had at their gigs before.

The seven piece Welsh outfit dropped their sixth album Sick Scenes earlier this year to positive reviews, having returned to the band for their ten year anniversary after a brief hiatus.  It hit the spot with everything the band had brought before; raw guitar, high energy, and sprawling lyrical twists and turns.  The band looked like they genuinely had a blast on stage and it was enjoyable to see a band throwing themselves around in their tenth year with as much energy and enthusiasm as if it was their first – and the crowd still loving every second.

I’d seen LC! before at Leeds festival, a set reaching an undeniably bigger crowd than this one.  Though Club Academy was a small venue in comparison, it served the band just right for their kind of music; intimate enough they could hear the lighthearted jibes from the crowd, as well as our endless singing along - but not too cosy to prevent a lot of sweaty dancing as the night went on.  And there was a lot of sweaty dancing.  Props to the band for bringing an energetic, nostalgic, and thoroughly enjoyable night to Manchester.