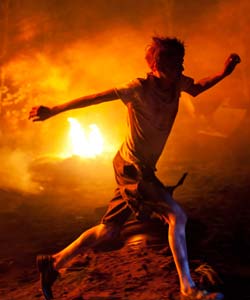 Lord of the flies at The Lowry

William Golding’s 20th century classic Lord of the Flies explodes onto the stage in a remarkable production direct from London’s award-winning Regent’s Park Theatre, creators of the recent smash-hit, To Kill a Mockingbird.

We were there for opening night and here is what we thought..

Lord of the Flies

When a group of schoolboys survive a catastrophic plane crash, what starts as a desert island adventure quickly descends into a struggle for survival in a darkly sinister world of superstition and immorality; an island of excitement and adventure turns into a place of fear and savagery and the civilised rules that we take for granted are quickly eroded, leading to a struggle for existence.

Nigel Williams’ adaptation of William Golding’s 1954 classic Lord of the Flies is more an immersion than a production.  This is not a stage – it is an opening into the jungle world of Ralph, Piggy, Jack, et al; a vision so realistic that it would have been no surprise to see Ant and Dec (they were mentioned) evict one of the boys.

Timothy Sheader and Liam Steel’s intricate and tight-paced direction takes in every open space and dark corner from ground level to tree tops, enabling the boys to run and explore not just the island, but also the gamut of their emotions. This talented young cast bring Golding’s vision of a society without rules bang up to date.

At the end we are abruptly reminded that this is just a group of young boys caught up in a moment of group mentality, now facing the realisation of their actions - a gripping, tense and thrilling experience from start to finish.

For more or to book.Visit here.