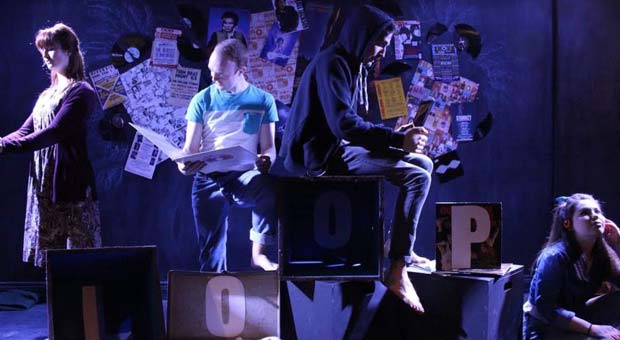 "I recently met someone who told me they never listened to music. I immediately knew we could never be friends. Without music, there's no soul, no rhythm, no feeling of unbridled joy when you hear a song for the first time and just know it's going to be with you forever.

'Loop' by Alexander Knott beautifully captures the pleasure of pop across three generations of family.

We open in the sixties with a suitably lyrical monologue. Lucy Annable is wonderfully wide-eyed and wistful as the girl stepping out into the big, wide world. She's leaving home and heading to Manchester. Love comes quickly, not just with a guy she meets in a pub but from Northern Soul music. The feckless man eventually legs it but Frank Wilson, Gloria Jones and Frankie Valli remain a reliable constant in her life.

Her fiesty daughter brings us to the early eighties. Girl meets boy to a soundtrack of Bowie and Duran Duran, Emily Costello and Aaron Price dance themselves dizzy with an easy, comedic charm as the awkward teenage romantics.

Finally we arrive at the present and their son who echoes his Gran's desire to move way and start a new life, fuelled by his obsession with music. Beats and mixes are all that matters and James Demaine captures the intensity and urgency of the boy perfectly.

The circle is complete when Gran introduces him to her favourite Northern Soul track. The world around us forever changes, but the music of our youth becomes the soundtrack to our lives and stays close to our hearts.

Every teenager derides their parents' musical tastes, unaware of the pattern they're repeating, It's a rite of passage and the construct is cleverly used in 'Loop' to explore other generational issues and conflicts.

Snippets of songs from various decades weave seamlessly through the piece. The quartet move effortlessly through each era with smart choreography and physicality that drives and enhances the story rather than detracts from it. With only a few props the actors become the set, supporting each other with impressive efficiency.

A perfect piece for anyone who has ever loved music.