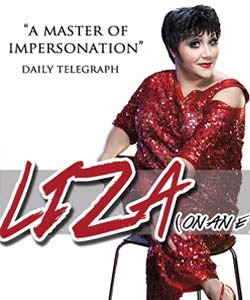 Liza on an E

Billed as, ‘Liza will dish the dirt on her extraordinary life, with a live on stage band, as she raises the rafters and brings the entire house down with power-packed performance of all her greatest hits.’
This critically acclaimed and just a little bit controversial evening will have you laughing, crying and screaming for more. The supremely talented Ashley channels Liza (and her alter egos) with several guest appearances, including her mother.
Anyone who dismisses this performance as just another drag queen 'doing Liza',really misses the mark: it’s NOT.There was clearly a genuine admiration and love of Liza regardless of the parody to follow.

Australian,Trevor Ashley, brings his show to Manchester for the first time and thank goodness he did. Ably supported by six musicians(the first clue of the musical quality to come)'Liza' commanded the stage from the start and wearing one of several recognisable costumes. She proceeded to take us on a familiar journey of alcohol, drug abuse,failed relationships,weight issues and of course family.Indeed, poor Lorna, her half sister, received her fair share of barbed comment.

Immediately, we all realised what a fantastic voice Mr Ashley has. His parody of the legendary Minnelli numbers was performed with tremendous vocal power, which was more than tinged with the unique speech affectations associated with the star herself.

There was great wit too,as clever,original lyrics to 'Liza with a Z'made reference to all the drugs you could name, aswell as the several husbands,from Peter Allen through to David Gest.

We were also treated to a hilarious version of Gaga's ‘Poker Face’,the forgotten duet with the late Donna Summer and a dozen or so classics from Gypsy,Sunset Boulevard and of course,Cabaret.
Highlights for me and my guest included,the terrible but funny, roast chicken metaphor re her gay husbands, the “pixie wig” and various sequined pyjama suits.  The running mascara, although tragic in a sense, was hilarious. 'Maybe this Time' and'Losing My Mind'were also memorable. The hand gestures and uncanny awkward, movements were both beautifully observed.

The energy throughout the show was frantic to say the least Mr Ashley was left “exhausted” at the end.His standing ovation was very well deserved.

The show has its second and final Manchester performance tonight. With the prospect of a dull October Wednesday in the rain looming,we strongly suggest you try to get a ticket at The Dancehouse.

FOR MORE INFORMATION AND TO BOOK