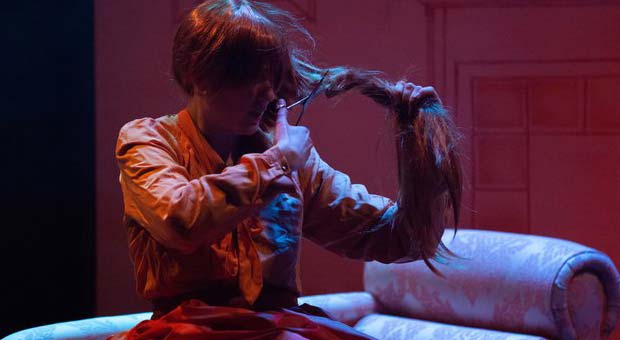 To the smaller of the two theatres at HOME for an 'adaptation' of Little Women by Louisa M Alcott ( according to the leaflet given out on arrival ) by Figs in Wigs, an all female performance collective ( from their website )

No idea what to expect and a very mixed audience present, a full house in the rather intimate space, no raised stage.

First half was roughly 20 mins of some kind of preparation for the second half.

The performers were suspended somehow above the stage, dressed in pink floaty gowns, it was a bit surreal and mystifying.

Got the gist there would be a mixture of original text/performance and other more abstract pieces which might reflect influences from the original, possibly also including climate change and feminism/patriarchy references. Had read the book avidly as a child and was relieved that it wasn't going to be some kind of faithful adaptation of it, as it has been done to death over the years.

Then, lights up and asked to leave the auditorium for an interval, which was most peculiar but we did comply. Just seemed a very awkward thing to have to do after only a short time.

Second half was about 1 hour and 15 mins. As indicated previously, initially a tableau from the Christmas Day chapter in the book and then a series of very different, separate performances, some of which appeared to reference or be influenced by the original, and some which did not ( my own interpretation, of course. Others may feel differently) - including a dance of characters who were a reference to the individual 4 sisters ( dressed as a ghost, lacy glove and a mannish suit with a horses head ), an excessive consumption nightclub/party scene ( with frozen sculpture the shape of which I won't reveal.... ) and its aftermath and several formation dance performances in matching outfits, some of which went on for way too long to be comfortable viewing.

The final scene, ( we had been informed in the introduction ) involved the makings of an enormous single Margarita cocktail, from limes being juiced in a contraption, to bottles of booze poured into a huge pan with the smashed up remnants of the ice sculpture, and then consumed out of a massive cocktail glass by the performers. Once this was over, up the curtain came and off we went into the evening, a bit mystified, perplexed and amused.

Nothing wrong with being challenged on your view of the original of anything, but just felt this never really got going and took shape. If you're curious, do check it out. It's just very different and like a strong Margarita, not to everyone's taste.