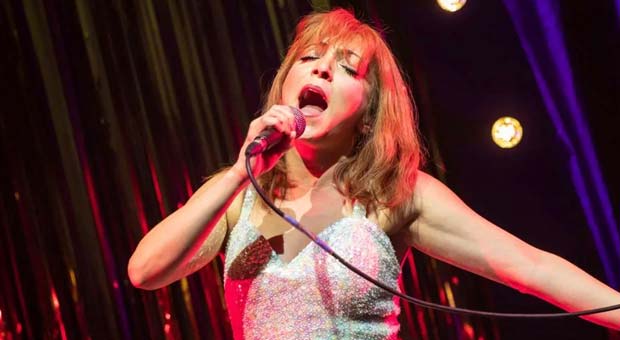 Little Voice at The Lowry

Shy and gentle Little Voice (LV) seeks a haven from her drunken mother by retreating to her bedroom to be transported to the music of her father through the legacy of his vinyl collection. She not only knows the songs word for word, but has the unique talent of vocally imitating the stars of yesteryear. In the role written for, and made famous by, Jane Horrocks, LV is played by Christina Bianco to perfection.

In front of others she is as vulnerable as a timid mouse, but when on her own she transforms into her musical icons: Cilla, Piaf, Garland, Bassey and more. We get snippets during the first half but get blown away by the full throttle of Bianco’s talent when she braves the stage of Mr Boo’s club.

In contrast, Shobna Gulati is loud and brash from the start as LV’s mother Mari, who has no time for her daughter, preferring a life of booze and cheap thrills. Gulati clearly enjoys every moment of this desperate woman constantly living life on the self-destruct button.

Her love for local talent scout Ray Say is yet another car crash, as all he wants is to make money from LV. Ian Kelsey (Ray) gets the humour just right which makes the later scenes all the more shocking. But the comedy highlight has to be Fiona Mulvaney’s Sadie – the downtrodden and put-upon best friend of Mari. She may not say much but every moment is comedy gold…apart from that disgusting moment in Act Two!!

Ultimately, this may be a dysfunctional family, their world may be broken, their dreams may be out of reach, but there is always a light in the darkness. As LV finds that light, the final scene leaves us with a smile on our faces and a tear in our eyes.