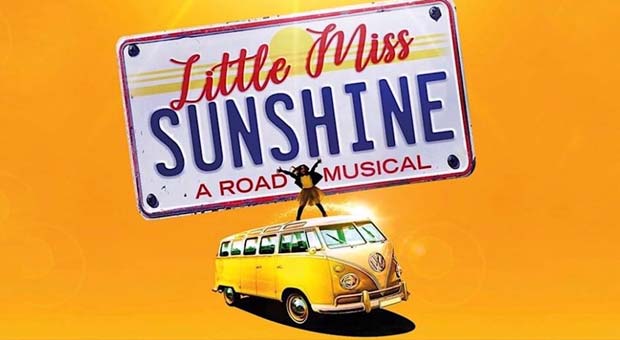 Little Miss Sunshine at The Lowry

They often say it’s the journey and not the destination that’s the most important thing but I think with Little Miss Sunshine the destination is the killer. The basics of the story is the dysfunctional Hoover family jump in their yellow mini bus to take their daughter, Olive all the way from New Mexico to California to partake in the Little Miss Sunshine competition.

Along the way the dramas of the individual characters play out whether it’s the fathers attempt to make money fast through a self help book deal or the doting grandfathers not so secret drug taking or the son who has take a vow of silence. The mother is deeply dissatisfied with the state of her marriage and her uncle attempted suicide over unrequited love.

Some of these stories work better than others but the actors are good in their roles. The side story around Uncle Steve’s unrequited love I find myself not caring about and this feels latched on. The flashback scene to when the Hoovers were in college feels clunky and out of place - I could have live without this scene in the play.

Overall I found the first half of the play a bit hit and miss. It’s a road trip, some of it works in my opinion, some of it doesn’t.

The second half of Little Miss Sunshine really picks up and I find myself really enjoying the second half. Upon reaching their destination we see stories established in the first half pay off. Olive finally gets to partake in the competition, there are some great moments here. Miss California, the winner from previous years whilst only appearing briefly is comic genius and Imelda Warren-Green is a damn good singer. Olives finally number is hilarious and brings the whole family together despite the dramas each of the family has gone through to get this far.

In terms of character I would say they have all been on a journey hence the saying I mentioned at the start of this review, in terms of this performance the second half where they reach the destinations they’re headed is what makes me appreciate this version of Little Miss Sunshine. The family don’t all have solutions to their problems by the end of story and that’s okay because that’s life. Strong performances all round.