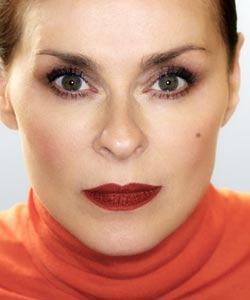 Lisa at the Bridgewater

Lisa Stansfield continued her return to form last evening. Beautifully supported by Krystina Myles, they both enthralled a packed house in the hallowed Bridgewater Hall. The enraptured audience were made up of a real mix of gender, age and a giddy mix of LGBTers.

Looking and sounding as good as she ever did, Lisa took the stage with her band of superb musicians (which, in number has become larger at each of her 3 concerts in the last year)and entertained a packed house for some 90 minutes or so, without an interval.

Dressed ina wonderful semi-diaphanous full length black dress, complete with 'horn like’ fascinator, she took control of the stage and her audience, from the very start.

Lisa kicked off with My o My. Faithful Gayers and Lesbians were among the first to take to All the hits were there too; People Hold On, The Real Thing, All Woman and Change.

Also memorable,  was her final song, the global hit, All Around the World. Most people we spoke too, had enjoyed the ease with which she moved around the stage and bantered with her audience.

There was also further evidence of her 'grounded' attitude for which she is famously known,with references to Carry On films and the irony of some of her newer lyrics.

Special note too must be made about the superb acoustic of the Bridgewater Hall, which always complement great, live performers such as Lisa. We were also treated to several

tracks from her forthcoming album which is due out soon. Another thrill was the arrival on A packed to the rafters audience were all on their feet well before the end of the show, except for a lovely couple behind us? One turned out to be Lisa's Dad. Rightfully, very proud of Lisa and her stunning performance.


For more informaion about Lisa.Visit her site here.