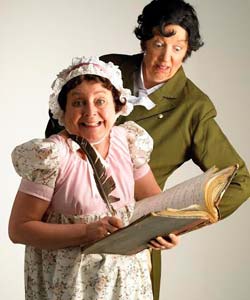 Maggie Fox & Sue Ryding have been writing and performing together since 1985. They have written eighteen original comedies for the stage, had their own comedy series on BBC Radio 4, many appearances on TV and won several awards.

LipService is now one of the most firmly established touring companies in the UK, touring throughout Britain but also abroad including trips to Pakistan, Eastern Europe, U.S.A. and Germany.

Mr Darcy loses the plot opened last night at Oldham Coliseum and we were there..

Have you ever taken the 25 min, 11 stops, tram journey to Oldham Mumps?  That journey and a short 5 min walk up a hill finds you on the doorstep of the much lauded Oldham Coliseum. My companion and I took that journey to see a play and boy, was it worth it.

Lip Service is a two-hander collaboration of some 31 years.  With scores of original productions and several awards under their belt, we were about to be treated to yet another with, 'Mr Darcy Loses the Plot'.

Firstly, it must be said that your need to pay close attention right from the start, as the initial scene is set with a female writer chatting by mobile phone to her Dad.  She is explaining to him that she can’t help him as she is in the middle of writing a new play.

Then we are off. We are introduced to Mr Darcy (played deftly by Maggie Fox) and his friend Mr Bingley (robustly male and played by Sue Ryding) .The banter is around their famous Pride and Prejudice characters and how as two males in the scene they should proceed without running out of things to say or lose their masculinity. When they start to admire each other’s attire, traditional gender stereotypes are dropped and much humour derived.

The entire first act is then a series of short scenes involving, not just Darcy, Bingley and the now introduced Miss Bennett, but also intertwined with Maxim De Winter and the 'mousy' Mrs De Winter from Daphne du Maurier’s ‘Rebecca’. A number of cleverly designed, quilted screens are constantly on the move allowing some fast paced character and costume changes giving the stage business real pace and energy.

A lot of the humour is provided by clever technical use of projections. We see, Darcy and Miss Bennett attend a dance with other revellers. Later we see Darcy dive into the lake at Pemberley showing his strength as a “deep water swimmer” and catching a carp. Well done to Video Editor Vita Fox here. More follows later.

Much of the swapping of characters and stories is easy for those familiar with the great works of Gaskell, Austen, Potter and Du Maurier. That said, such knowledge is not essential, as the talented use of puppetry, farce and comedic timing kept a busy first night house thoroughly entertained throughout.

Intermission is called and the bar chat is lively and complimentary.

More familiar scenes from Rebecca, with lost boats found and burning buildings, prompting hysteria in Mrs De Winter and huge laughs with the unannounced arrival of Mrs Danvers who proceeds to encourage Mrs D to jump from an open window. Then, out of the blue arrive Jemima Puddleduck and the lusty, hungry Fox. A series of short scenes pay homage to another female writer Beatrix Potter. Whilst the costumes and performances were again stunning, these characters were our least favourite of the night and we were delighted to be quickly returned to the Darcy, Bennett, Bingley and the De Winters for their final outcomes.

Confused yet? Worry not, as all is revealed when you are actually there.

Ryding and Fox must be exhausted post performance as they are never off stage and the fast moving nature of the play and its sharp, witty text challenges them whilst entertaining we the audience.

Brava both. This erstwhile couple have written, performed and promoted this show. Oldham was the first night of a multi UK venue tour.

High praise too for the ever friendly team at the Coliseum from Box Office through to bar, with great technical support as a key factor in this production.