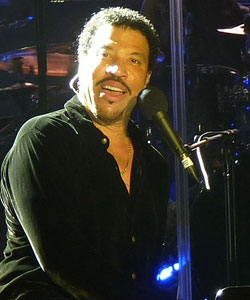 Well 'our Lionel' certainly kept us waiting. His arrival on stage at 20 past nine, was probably,  just in time, as the ‘packed to the rafters’ audience seemed to be almost on the verge of mutiny. However, as soon as the lights went down, the roar of expectancy was truly deafening and we all knew it was going to be a special night and special it was.

With very nearly 45 years at the top, Richie effortlessly took us through his repertoire of hit after hit, both as a solo artist as well as his early success as the lead singer with the legendary Commodores. ‘Brick House,’ a particular favourite of mine, brought everyone to their feet. This was followed by the Richie penned and more romantic, easy-listening ballads, such as; ‘Easy,’ ‘Three Times a Lady’ ‘Still’ and the tragic break-up ballad ‘Sail On.’

His well-known wit ever present, along with the constant references to “Manchester,” duly entertained the crowd. By way of a finale, Lionel kept his 'crown jewel' till the end. A wonderful version of ‘All night long,’ turned the Manchester Arena into one massive nightclub. We were never informed why there was a delay in starting but by this stage, no one really cared anymore. ‘The Tuskegee Tour,’ is homage to his birth place, rolls on to other cities across the UK and Europe, most of which is already SOLD OUT.