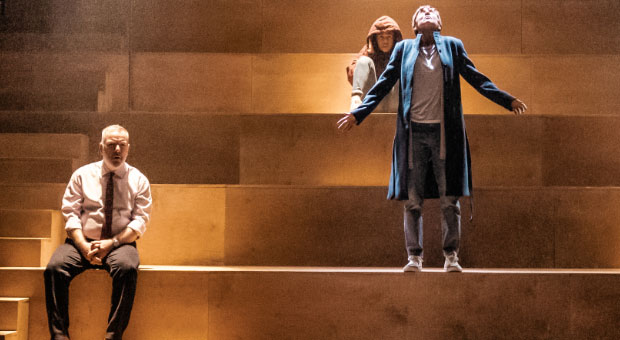 Artistic Director Sarah Frankcom takes a final bow at the Royal Exchange with the world premiere of Simon Stephens’ Light Falls. In his sixth play written for the Royal Exchange, Stephens introduces us to Christine who, through her 15-minute opening monologue, reveals she is a recovering alcoholic with a disparate family scattered across northern towns. One daughter (Ashe) is a drug-taking single mother; another (Jess) wakes up in Blackpool with a stranger staring at her; her gay son, Steven, is at uni in Durham; and her husband (Bernard) gets off on young women. Then she collapses and dies – in the supermarket aisle.

In a move from the usual theatre-in-the-round experience, Naomi Dawson’s design transforms the performance space into a thrust stage, consisting of a series of plywood flooring and steps filling one side of the auditorium from stage to circle level. Frankcom’s direction places family members at these different levels, each looking unseeingly at their relative’s scenes playing out above, below and around them. Throughout the action, the deceased mother/wife looks on. The lighting is stark throughout the first half, reflecting the harsh reality of the family living their separate lives; this electric harshness softening as they hear of Christine’s death, with rain washing away the past as they are forced to come together and reconnect. With original music by Jarvis Cocker, I was expecting to hear more; however, the final moments of the evening were hauntingly harmonic.

There are touches of humour, but  Light Falls is a solemn piece about family members who have drifted apart, as is often the case today, each living in their own bubble and fighting their own battles. A mother’s alcoholism was the catalyst for her loved ones’ escape; the matriarchal death finally brought them back together, but how long before they drift once more?