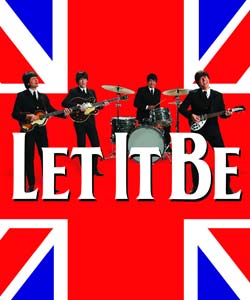 A series of standing ovations greeted the first UK & Ireland tour of the hit Beatles show, Let It Be, launched at the Palace Theatre after a successful run in London’s West End.

Although theatre critics tend to be disparaging about tribute shows - this is one of the best I’ve seen - and the audience loved every minute.

We probably all remember Paul McCartney performing at the London Olympics which in fairness was not his finest hour. Many of us will also have had parents that brought us up on a diet of Motown and Beatles classics. I myself were one of those children.

my Mum often tells the story of how she could of married Paul McCartney and of how she would of made sure that he never turned vegetarian. Well with all of this in mind last night my cousin and I headed to the Palace Theatre for the opening night of the UK and Ireland tour of the Beatles show Let It Be.

The audience were greeted with nostalgic, black and white adverts from back in the day which thrilled many and made the younger audience members giggle. The show starts off in The Cavern club, which with a clever use of projectors looks very real, as do the Fab Four themselves.

The feel good factor kicks in from the outset and the audience loved it. The hits kepy on coming, as we are whisked from Liverpool to London for the Beatles Royal Variety Performance and then to America for the Beatlemania days. We are then transported across the globe and through the years with very clever staging and a cast of eight very talented musicians who each do four shows a week each.

The highlight of the first half was the St Peppers set which was epic and a sheer delight to watch. The show then returned with the Magical Mystery Tour which transported us to the heady days of love and peace, before we moved on to the acoustic sessions.

The second half of the show really felt like a concert with great performances from John Bronsan (George), Ben Cunningworth (Ringo) and Michael Galiano (John). There is a real positive vibe to this show, highlighting the history making band in the very best way without numbing you with facts and figures or touching on the politics and fighting between each other,all of which are well documented.

At the core of the show is a Beatles tribute which is upgraded with great sound, lighting and passion from all the performers. There is no denying that the audience loved every second of the show, both young and old were on their feet dancing along to the uptempo numbers and singing along to the famous ballads, there were even a few "I love you Paul" shouts from the female members of the audience.

Speaking again of "Paul", James Fox, who plays McCartney stole the show for me with the sound and look of the superstar. The set list is a stunning tribute to the legend that is  The Beatles with the audience demanding more after a superb rendition of Let It Be which saw the four piece thrill the crowd with an impressive Hey Jude sing a long.

Let It Be is a must see for Beatles fans of all ages and for music lovers who just love to look back to that age when bands were usually groups of friends who start out in their parent's garage and not on a talent show like today's chart acts.

The show runs until Sat.