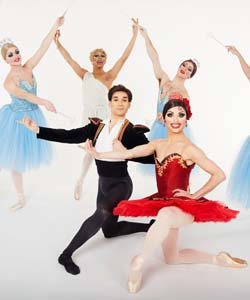 Affectionately known as The Trocks, this company of professional male dancers presents an inspired blend of their loving knowledge of dance, their brilliant comic approach, and the astounding fact that men can, indeed, dance en pointe without falling flat on their faces!

They appear at The Lowry as part of their current tour and we were there last evening.

Last night 15 dancers performed excerpts from 2 classical ballets, created Patterns in Space, delighted us with some Bach and gave us a wonderful Dying Swan to boot.

Nothing exceptional about that you might think?You would, however, be wrong as the entire cast was male.

Having just celebrated their 40th Anniversary season, Les Ballets Trockadero de Monte Carlo was set up 1974 by a group of ballet enthusiasts for the purpose of presenting a playful, entertaining view of traditional, classical ballet in parody form and en travesti, Les Ballets Trockadero (affectionately known worldwide as The Trocks) first performed off Broadway.

Since then, they have toured the globe with their unique take on much of the classical repertoire aswell as many original pieces.

500 cities and 33 countries later, they arrived at Salford's Lowry theatre last night for the first of 2 performances.

Act one received a warm reception from an audience who had clearly seen them before.Swan Lake, is quite possibly the best known classical ballet and they set about it with gusto,great talent and a huge sense of parody and fun.

Strongly disciplined as ever, our dancers cleverly combined true artistry (choreography after Ivanov) with touches of Laurel and Hardy, Mack Sennett and  Chaplin.They were all there.

The purists would be horrified no doubt, but then again, they probably would stay away.Undoubtedly their loss, as this rendition was  both hilarious and challenging at the same time.The audience roared its appreciation as we too our first of 3 breaks.

We returned to Patterns in Space.Choreographed by Merce Cunningham, this short piece clearly cocked a snook at the world of Contemporary dance with 3 dancers moving in an improvised manner, seemingly independent of the hugely comedic musical accompaniment.

Go for Barocco, was our next piece.An homage to Ballanchine, with a wonderful score by J.S Bach, the almost robotic style was beautifully executed as the intricate choreography by Peter Anastos, was complemented by some truly great dancing.

Barocco provided the perfect bridge between Swan Lake and the final act which was to be Don Quixote.

Prior to this however, we couldnt possibly attend an evening with The Trocks without Raffaele Morra's famous Dying Swan.His moulting tutu, graceful movement and comedy timing always brings the house down.

Petipa and Gorsky's Don Quixote, is perhaps lesser known than other classical ballets, as is its score by Ludwig Minkus.

Not a problem to this audience however.The dramatic gesturing,superb fan work and a storyline that included an old hag who gloriously transforms into a beautiful

Ballerina, complete with wand, all combined to provide an hilarious parody.

The fact is that like the beloved Les Dawson, in order to convince any audience that you are making mistakes with a performance, you need to be exceptionally good in the first place.Thats the story of The Trocks.

Terrific pointe work by all throughout, disciplined lines and a clear love of the classical repertoire all combined last night to entertain a packed Lyric Theatre at The Lowry.

Some tickets are still available for the final performance Sat 7th November.We reccomend you treat yourself.

For more about The Trocks.

Still some seats for tonight.