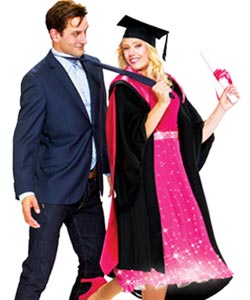 Legally Blonde The Musical is unashamedly camp, pink and fluffy.  This award-winning musical attracted a packed house on its opening night at Manchester’s Opera House.
This all-singing, all-dancing romcom is the musical spin-off from the Legally Blonde film and has gone on to win seven major awards including Best Musical 2011 (Olivier Awards).

It features Faye Brookes as Elle Woods, who played her part perfectly as she conveyed real warmth, great comic timing, vulnerability and vitality.  Special mention required of the sequined costumes and fluffy bunny look.
The Malibu bottle blonde is studying “fashion merchandising” but is far more interested in her boyfriend who then dumps her on the night she’s expecting a proposal because he’s moving on to a serious life at Harvard Law School.
She follows him, with Chihuahua Bruiser” in tow.
The Harvard snobs look down their legal noses at her, but she wins through in the end takes on a murder case and wins, not just the case, but a new man Emmett.

Rippling Lewis Griffiths strode confidently across the stage as the UPS Delivery Man, finely toned muscles rippling beneath skimpy shorts before an admiring audience of canal street’s finest.  The ensemble and dancers enthusiasm was electric, leaving the audience on their feet screaming for more!!!!

Jerry Mitchell the director and choreographer has created a great feel-good show, which is light, fast and frothy, with some great dance routines.  Laurence O’Keefe and Nell Benjamin’s score is upbeat and catchy and catchy.
Your Canal Street correspondent was definitely left in “in the pink”