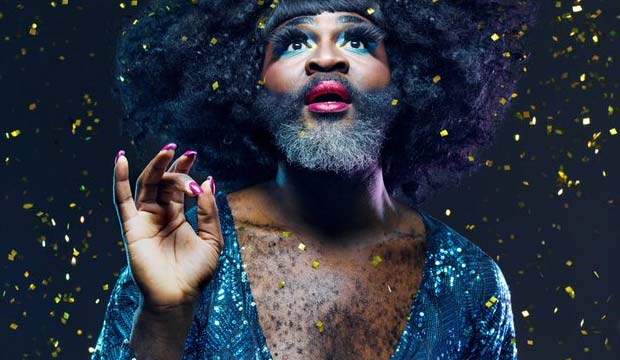 Le Gateau Chocolat is an award winning cabaret star extraordinaire who performs all over the world as well as the Royal Albert Hall and the National Theatre.

Le Gateau came to Manchester’s Contact Theatre this week with his first show for families, “Duckie”.

Duckie is a one man show, reinventing the childhood classic The Ugly Duckling and was an absolute joy to see. I’m lucky to review a lot of things for Canal St Online but they are usually for us grown-ups so it was refreshing to see something family orientated and the kids in the audience were really enjoying this odd mix of song and drama.

Le Gateau shows what a seasoned performer he is, making great use of props and audience participation as our hero, Duckie, travels through different cages at the circus trying to find his identity after he is rejected by his fellow ducks because he can’t dance. Will the lions let him lift weights? Will the sea lions let him catch balls? Can he tread the tightrope as glamorously as the flamingos?

I can’t tell you the answer to that but I can tell you that “Duckie” is a great morality tale on acceptance.

What was particularly impressive was that Le Gateau performed to recorded narration and sound effects perfectly. The voiceover was quirky yet perfect to tell a children’s story and the use of sound effects and music took the performance to the next level.

Adding to this was the incredible vocal range of Le Gateau who brought in reworked Disney classics as well as original numbers for his expertly created characters to sing.

The Contact Theatre really threw themselves into it with colouring in and mocktails in the bar, I refrained sadly.

Overall I can’t fault this production, perfect for half term entertainment for adults and kids alike.