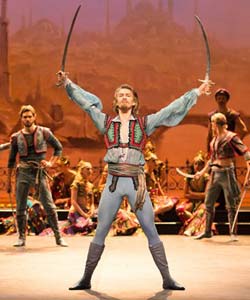 Jules-Henri Vernoy de Saint-Georges loosely based his ballet on Lord Bryon's, the English poet, Le Corsaire and it was first presented in 1856 at the Theatre Imperial de l'Opera in Paris.

The English National Ballet is now touring a new production of this popular ballet which features many celebrated passages such as the Le Jarden Anime (The Garden of Anime) which is often performed independently.

The Artists of the company are excellent and clearly enjoy performing such a piece of work with its emphasis on many solo parts and plenty of group pieces including an engaging fight scene at the Corsiares hide-out, reminiscent of the west side story fights between the sharks and the jets.

This production is joy to watch complete with many special effects and beautiful costumes.

There is one minor issue and that is to do with the stage size at the Palace Theatre. It is evidently too small to allow the artists to bring their full flair to the dances as there is a risk of falling off the stage.

This aside you are in for a thrilling and enthralling night.

After a spectacular opening with the Corsiare sailing, at sea, the action moves to the Marketplace. Here the hustle and bustle of trading in goods, services and slaves is engaging the villager's day. The corsair and his motley crew arrive into this busy scene intent on having a good time.

We are also introduced into the Amir, or King, and his attendants who are in the market for new dancing girls. Many girls are presented by the trader and they perform a body of excellent solo dances.

One of these girls in particular is extremely beautiful and both the Amir and Corsaire are both drawn to her. The Amir buys the girl and the Corsaire hatches a plot to steal her from the Amir. A battle ensues and the pirates get away with the girls, many of the Amir's harem and the trader.

Back at the Corsaire's hide-out the two lovers are in great happiness which begins to vex his crew and after the girl persuades the Corsiare to release the captured harem girls the crew plots to rid themselves of this troublesome pair resulting in a fight and then a more subtle approach.

The action returns to the Amir palace as the trader returns the girl. Meanwhile the Corsaire has regained control of his crew and plans to recapture the girl.

The Amir falls asleep and dreams of dancing flowers in his Garden. He is awoken by his attendant who says visitors have arrived who are asking for an audience. The Amir is taken in by the gifts they present and he invites them into the palace as guests.

Of course, the visitors, are revealed to be the private band and soon they have recaptured the girl, many others from the harem and treasure. They make good their escape by ship.

However a huge storm lashes the ship and it is wrecked on the shore. Who has survived? You will simply have to go and see the show to find out.

It runs at the Palace Theatre, Manchester until Saturday 15th and book tickets here