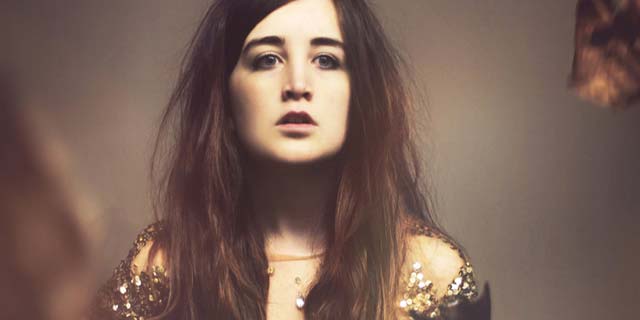 Monday’s sold-out gig at the Deaf Institute is Lauren Aquilina’s first gig in Manchester in four years. She was an Island Records signee, had opened for Taylor Swift and built a dedicated fanbase through the independent release of a trilogy of EP’s, but after releasing her debut album “Isn't It Strange?” in 2016, the Bristol popstar announced she'd no longer be releasing music due to the strain her music career was putting on her mental health. In the months afterwards, she turned her head to writing songs for other people, but in the end, she was drawn back to the stage.

From the get-go, it’s obvious a lot of the people here were at that gig four years ago. And the one before that. A girl beside me is seeing Aquilina for the “fifth or sixth time.” I am asked where I’ve seen her previously and when I say it’s my first time at a Lauren Aquilina gig the response is “Really?!” And then “She’s so good, she always is!” This turns out to be true.

“It’s so good to be back, I’ve been waiting to come back for so long” Lauren Aquilina declares, beaming as she finishes her first song. The audience have missed this as much as Lauren. Older songs like ‘King’ are met with yelps from the crowd (“You got what you came for” Aquilina teases) while those in bandshirts emblazoned with the names of old EPs are particularly pleased when Aquilina notes she’s delighted to recognize faces in the crowd that have been with her for years.

If Aquilina was afraid these fans wouldn’t be as enthusiastic about her new stuff, ‘If Looks Could Kill’ quickly puts that fear to rest. It’s the first taste of fresher fruit tonight, and the sexy number has Aquilina running her hands over her body singing, “Just tryin' to work out how you gave me up.” This is a new side to her we haven’t seen, in a black mini with long metallic nails and hints of pre-choreographed moves, she’s channeling the girl bands these songs were written for. When she mimics a gun being fired, the audience explodes.

A stand-out of the night is her forthcoming single, an open letter to her mother. After the band leaves the stage and she fiddles around with mic stands for a while (“Now that I am an independent artist I can’t afford a tech”), she moves to a keyboard at the back of the stage. A few lines in to the song and a hush has fallen over the crowd. The lyrics are painfully honest. She knows her mother wouldn’t be proud of her right now, she croons, but she isn’t a smoker or a drinker “just a crazy overthinker.” Her vocals are the strongest they’ve ever been, at one point almost hitting the whistle register with not even a hint of strain. The silence is broken only by a rapturous applause at the songs end.

She closes the show with ‘Fools’, a song she tells the adoring crowd she wrote about falling in love with her best friend. This elicits a sing-along so strong that you might struggle to hear the artist herself in the Instagram Stories. After a brief bounce backstage, she’s back with the encore: ‘Psycho’. It’s the song that made her return to the stage, and it ensures Aquilina ends on a homerun. While Aquilina has certainly changed in the years since Manchester saw her last, she hasn’t left her roots behind. She’s still got some ballads up her sleeve, and she’ll play you the one you listened to on Youtube six years ago, just be prepared to get served a lot more sass with the sadness this time around.