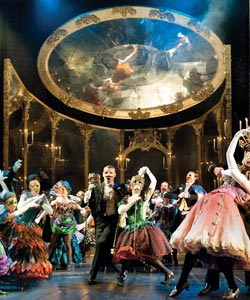 A camp Tuesday night in Manchester is nothing unusual in itself. Take a full auditorium, over the top costumes,  a stunning set, lots of make-up and choreographed dancers filling the stage. Was this the Steps concert at Manchester Arena? No. It was in fact, the welcome return of the brand new production of Phantom of the Opera. The wonderful Palace Theatre with its slightly cramped seats, stunning historical features and decades of Theatrical memories, was more than a suitable backdrop to Paris in the late 19th Century.

The familiarity of this lavish score soon 'kicked in' with some lovely early touches, in particular from the Manchester born, Angela M Caesar as Carlotta. The first act is crammed with well known songs that a generation have grown up with. The main theme Phantom, ‘Music of the Night’ and of course ‘All I ask of You. After being initially unsure about Katie Hall as Christine Daae, she completely found her form and performed superbly for the rest of the performance. As The Phantom increased his presence in the piece, the exceptional voice of John Owen-Jones delighted the entire audience, who were by now, completely hooked.

Act two opens amidst the chaos provoked by 'The Angel' and following the renditions of ‘Wishing You were somehow here again’ and ‘Point of no return’, both of which received rapturous applause, our story came to its dramatic conclusion with some clever final illusions.

After a well deserved standing ovation for the cast, we all spilled out onto Oxford Road. The night had a feel of one of those rare, great, Manchester theatrical events that are few and far between these days.

Oh! as for Steps performing across town. We are told they had a great night too.

Phantom is a must see event and runs until May 19th.

For more information and to book..Click here.