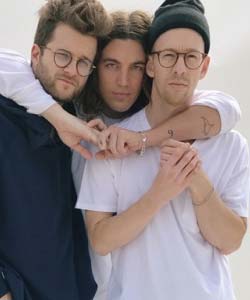 LANY - a three-piece electric pop band from Los Angeles, California - are doing everything that 2017 demands a successful band to do.  Big on social media, putting out hazy sunshine dreamy pop videos, and supporting online sensations such as Troye Sivan and the X-Ambassadors, they still confess to having releasing their first songs to “absolutely zero” people.  Just a couple of years into their career, they’re selling out gigs across Europe, Asia, and the States, and have amassed a hefty, hard-core online following. We went along to meet them before their gig at Gorilla this evening.

They’ve not been in Manchester long.  Their Twitter feed tells me they were in Melbourne yesterday, Manila the day before, and Singapore the day before that.  “Tired,” all three - Paul Klein, Les Priest, and Jake Goss - chorus when I ask them how they feel to have bounced continents so quickly.  “But we were just here in Manchester last year, so we’re thrilled to be back.”

That was August, in fact, and they played Sound Control, with around 150 fans queuing up hours before doors just to get in. “It’s worrying.” Paul says, when I mentioned that Gorilla was sold out tonight, too. “Worrying, but exciting. It should be good.”

All this travelling around, plus a self-confessed “super formal” announcement of their album release - a video of all three of them sat on a balcony - it’s no wonder they’re tired.  But they come across as super intimate in their work. And maybe that’s what works; their comfort with new online media lets us in closer than traditional bands perhaps do.

I ask them about how they manage to get across this universality of intimacy that their songs – especially ILSB (I Love You So Bad) - gets across. “I mean,” Paul says, “I feel like we’re all pretty similar.”  Les and Jake give him a glance.  “Not like, us three,” he laughs, “But, the human race. I do speak about universal topics, but I guess people connect because we experience similar things, we’re all human at the end of the day.”

They must be doing something right. Their gigs garnered the support of a Change.org petition, because not enough people could get access.  “Australia has these weird laws,” Paul says, grinning when I asked him about it. “It kind of caused an uproar.  But we were down there for like a week, so we scheduled a show on Bondi beach where we played like five songs, and it was like, well, you don’t have to be a certain age to be on the beach, so everyone come along.”

They make it sound easy, and likewise when I ask them about their creative processes. “We don’t leave any songs behind, we don’t make any half-assed ideas, we’ll pick up the song and work on it constantly.”  Their debut album is available for pre-order on iTunes now, with fifteen of the new songs brand-new, unheard of material - and the thing they’re proudest of in 2016? “All the songs, all the material.”

I ask what we should expect from this material, and Jake tells me, “It’s very much LANY,” - a fact that will appease their growing fan base. “We could have brought across some obvious ones [from their previous EPs] – but there was no need for us to do that.  There’s a lot of variety, a lot of depth, we have so much more material.”

So much that fans can even look forward to an extended deluxe version of their album, with even more unreleased material. The boys seem to work exceptionally hard - and I don’t blame them for not knowing where they’re headed on the first leg of their central-European tour after London tomorrow night.

“I think it’s a massive accomplishment for us,” Les says referring to the completion of their debut album, “But we didn’t even celebrate yet, did we? Not just the three of us.”

We’re looking forward to seeing them at Gorilla tonight, and, and we hope they get to celebrate sufficiently soon enough. With forty tour dates lined up between now and the beginning of May and their debut album coming just weeks after, they absolutely deserve it!