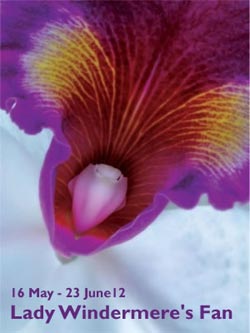 Wilde's masterpiece constantly reminded us that many of the aforementioned issues have in fact been around for centuries. The Production had all the hallmarks that we have come to expect from the team at the Exchange. Although the set was modest by their standards the level of performance and stunning costumes to boot, more than made up for that.

The first act, set the scene by establishing the plot and in particular the 'secret' relationship between Windermere and the mysterious Mrs Erlynne. We see the affect this has on the marriage of the Windermere's and the many added layers of opinion from the ensemble cast.

Despite one or two minor issues with pace in the first Act, we are left really wanting to return after the interval in order to see the plot revealed. Performances throughout are very strong and each of the cast, take the opportunity to shine. The 'guy' scene, is highly entertaining, as are many of the scenes involving the main characters.

Particular praise must be reserved for Lysette Anthony as Mrs Erlynne who commands our attention at all times. Wonderful too is Bernice Stegers as The Duchess of Berwick, who has many great lines including when describing her plain nieces making "ugly things for the poor" A high camp performance indeed. One memory of this great work is just how many familiar lines came from it. "I can resist anything but temptation" being just one.

At around 2 hours 20 minutes including an interval, this production pleased in every way. Highly recommended and sure to sell very well. One not to miss this season.