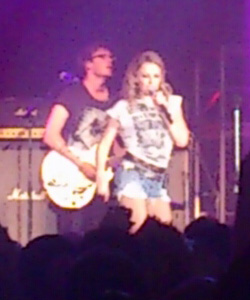 This really is one for the hardcore supporters, performing only B-sides, rare tracks and demos, throwing in only Got To Be Certain and randomly Tears On My Pillow in terms of hits.

However if you were lucky enough to be dragged along there was no doubting you had a ball. The charisma and the crowd atmosphere was simply amazing. Particularly endearing was the fact Kylie admitted she didn't know the lyrics to most of these songs, having to Google It's No Secret! However, 2300 people in a fittingly intimate venue were happy to lend a hand (and voice).

A great concept, which hopefully triggers other big artists into giving their fans the biggest thanks possible.