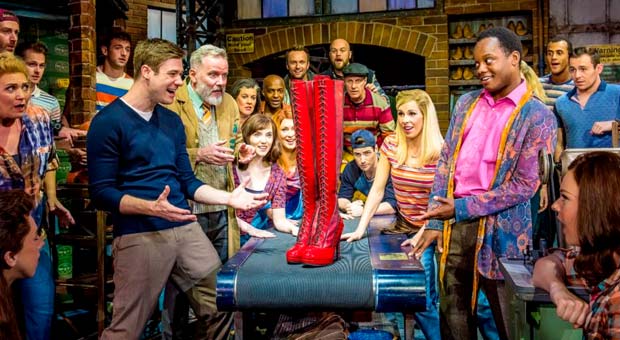 Kinky Boots at The Opera House

Charlie Price (Joel Harper-Jackson) is the 4th-generation in his family business, Price & Son, a struggling shoe factory in Northampton. Whilst his father is keen for him to take over the business, Charlie would rather move to a marketing job in London, spurred on by his class-conscious fiancée, Nicola (Helen Ternent). However, when his father dies, Charlie sets out to save the family business. As he lays off staff to cut costs, one of the workers, Lauren (Paula Lane), tells him he needs a niche market, and boy does he find it! Welcome to the Land of Lola (Callum Francis), drag queen extraordinaire.

With a book by Harvey Fierstein and a score by Cyndi Lauper this is guaranteed to be a big hitter musical, bringing a touch of West End magic to Manchester – and it doesn’t disappoint. From the mundane setting of a shoe factory, to the glitzy campery of Lola and her leggy Angels, every moment is spot on. But it’s not all big numbers - Not My Father’s Son is a heartfelt interlude of gentleness as Lola reveals her past and what made her who she is today, made even more emotional as Charlie harmonises similar feelings.

Callum Francis is magnificent as Lola – confident and towering in stilettoes and sparkle with a voice to match; small and insecure in shirt and trousers. Francis headlines a great cast, not just the other leads, but the likes of Demitri Lampra (caveman Don) and the cheeky moments of Adam Price (George).

This is a story of family and heart; of laughter and hurt. Different worlds collide and wrong choices are made, but, as Charlie discovers, if you can change your mind, you can change the world. So glam up, squeeze into your sequined boots and strut on down to the Opera House for a night of kinky love.

Hats off to at Randall and Aubin (around the corner) for their wonderful Kinky Boots cocktail which set the evening off beautifully.