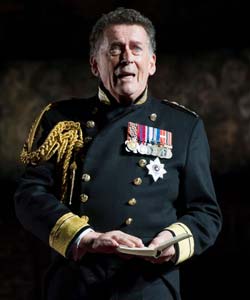 Prince Charles is now King and the knives are out.

Doctor Foster writer Mike Bartlett imagines a Great Britain, which is not so great anymore. The Queen has died and Prince Charles steps up. His idealistic ways are at odds with the government and as the world mourns a great queen, he soon realises that the ‘part’ he was born to play is not as easy as his mother made it seem.

If that sounds intriguing to you, you are in for a good night at the theatre. Directors Rupert Goold and Whitney Mosery really crank things up in act two, so that once the foundations have been laid and the audience are comfortable, events start to turn and it becomes very Shakespearean.

Most of the main characters fare well, retaining traits that we recognise but some supporting characters are slightly underwritten – Prince Harry’s commoner girlfriend – Jess,  for example. We do not really know her, despite a good performance from Lucy Phelps. And she is hardly Wallis Simpson though, as Harry has less at stake. And when the ‘spare heir’ enters a kebab shop and talks about shopping at Sainsburys with envy, the character starts to resemble a Spitting Image puppet, as opposed to a supporting character, imagined by the Bard.

As the King, Robert Powell is perfect, as he captures Charles’ defiance but also his need and desire to do a good job for the people. He avoids impersonating Prince Charles and this means that you can watch the play as a straight drama, even if you are not a Royalist.

Jennifer Bryden’s Kate gives the performance of the night. She is so much more than a hair flicking mannequin. As a modern Royal, she talks of being a silent observer and she is a driving force for William; she says what he dare not say to his father, empowering him to speak the truth. At times, she is Lady Macbeth, at others she has the grace and charm of Princess Diana. And this brilliant actress delivers far more than a stereotype.

Talking of Diana, her ghost appears and this might grab headlines and remind you of a fractured Royal Family, but it does jar a little, once you have gotten over this cheeky addition.

Tim Treloar is also excellent as the frustrated Prime Minister, who finds himself, giving the King an ultimatum. Richard Glaves skips across the stage like a lamb, as Prince Harry and does his best with a role, which feels slightly too cartoonish.

King Charles III offers a glimpse into the future and even though it veers into soap opera territory at times, and the pace drags in act one – the second half rewards, as it is a satirical and clever play, filled with moments to savour and as much laughter as there is darkness.

King Charles III at the Manchester Opera House until 12 March