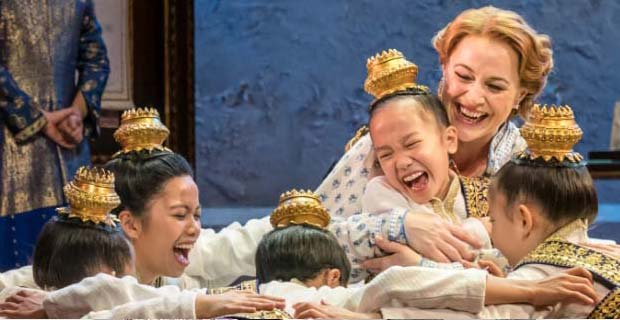 The King and I

Based on Margaret Landon’s novel Anna and the King of Siam, The King and I, written in 1951, was Rodgers and Hammerstein’s fifth musical. Anna Leonowens, an English school teacher, is hired by the King of Siam to educate his children (and wives) in the knowledge and etiquette of a more modern world outside of their home country. Anna is a feisty lady who believes in equality and would not be out of place in today’s society, but her bold attitude and resolute stance towards the King causes shockwaves through the Palace of 1860’s Siam. As their tale unfolds, it’s clear the constant conflict hides a deeper emotion. Will they ultimately live happy ever after?

A stellar cast is headed up by Annalene Beechey (Anna) direct from the recent West End production and Jose Llana, who played the King at New York’s Lincoln Center Theater, the theatre that produced this version. Both leads excel in their roles, perfectly capturing the stubbornness, bigotry and ultimate magnetism of their characters. Across the production, every performance, the choreography, costumes, lighting and staging are all second to none, but the musical itself is definitely of its time. I struggled to enjoy the story and felt I’d stepped back in time to the theatre of the 50s. Musically, the score (aside from the over-long The Small House of Uncle Thomas ballet) and orchestra impress with musical classics: The March of Siamese Children is delightful in its humour and cuteness; Getting to Know You is a glorious meet and greet that lights up the stage; Shall we Dance is a swirling coming together of East and West.

The premise may be dated, but this excellent production is definitely worth a visit – it sparkles with sumptuousness and will leave you whistling a happy tune all the way home.