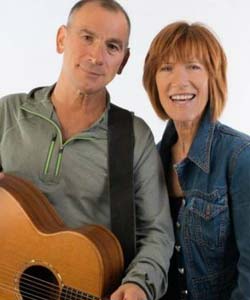 People of a certain age may remember Kiki Dee with Elton John with her red hair in a bob and very straight fringe.  Forty years on and she hasn't changed too much and her talent is still exactly the same.

Kiki along with her musical collaborator, Carmelo Luggeri treated us to 2 one hour long sets at the Met. The first set was very mellow and ambient including a very stripped back 'Don’t go breaking my heart' and many tracks from their second and third albums. Carmelo is a very accomplished guitar player. He had multiple instruments laid out on stage. He explained that there were so many because he used unusual tuning with quite an Eastern feel..This became more obvious in the second set when they played tracks from their first album 'Where Rivers Meet' which has a definite East meets West feel.

The second part of the show was certainly more lively than the first half Kiki treated us to her hits 'Amoureuse' and ' I’ve got the Music in Me'. The encore was mainly cover versions with an excellent rendition of the Janis Ian song 'At 17'. Towards the end of the second set, Carmelo started to jam a tune and told Kiki that she had to ad lib a song to it .This she managed well. It was  all about the Bury Met or the Bury Mart as she kept calling it until Carmelo corrected her. At the end Kiki thanked the staff at the Met saying that they are always friendly and that they always look forward to playing there.

A trip to the Met is always recommended also, I  highly recommend, if you can, to go and see Kiki and Carmelo. Check their website, www.kikiandcarmelo.com to see upcoming dates.