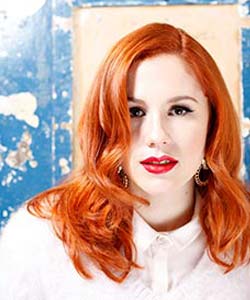 Following the heady club swagger of the ‘What Love Is Made Of’ and the radio 1 A-listed ‘5 AM’, Katy B now presents another facet of the rich musical palette on display on the forthcoming album with new single ‘Crying For No Reason’.

Hot on the success of her first number 1 album, 'Little Red', Katy B finishes the first leg of her tour in Manchester. Luckily it's on a Saturday night, as she is as ready to party as the crowd. Opening with 'Hot Like Fire' from the new album, we are treated to a mainly relentless rave: we realise we are too old to say rave! The crowd is nicely mixed re ages/demographics, which is great to see. Kathleen (her Sunday name), slows down the tempo for 'Tumbling Down' and arguably the best track of the year, 'Crying For No Reason'. The latter number is stunning and shows us how amazing her vocals are, as sometimes they may be lost in the genre.

We're soon back to the dancing though with particular highlights being 'Next Thing', 'Aaliyah' (a modern day 'Jolene' or 'The Boy Is Mine'?) and new mid-tempo single, 'Still', all from the new album, showing how far Katy has improved from her debut in 2011. Following 'Katy On A Mission', and the worst encore bluff ever, we finally end with the Ms Dynaminte duet 'Lights Out'.

Katy declares she is ready for an after-party or two... so are we! The second leg of the tour continues in October, with another date in Manchester included.