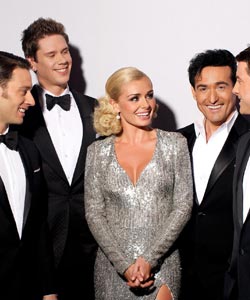 The tone was established right from the start with the Titanic theme tune, My Heart Will Go On. Il Divo’s speciality is the power ballad, and plenty of them, usually sung in a foreign language to take away the sense of weary over-familiarity we may feel on hearing the likes of Un-break My Heart, All By Myself, and I Will Always Love You for the umpteenth time.
Next came Katherine Jenkins, dressed in a sumptuous purple silk frock. With her angelic, golden curls and glorious voice, she proceeded to captivate the crowd at The Manchester Arena  on Tuesday night. Around 12,000 eager fans gave Jenkins a rapturous welcome to the region as she united with classical quartet Il Divo for the concert.
Katherine joined the group - Carlos Marin, David Miller, Sebastien Izambard and Urs Buhler - for the latest leg of their whistle-stop UK and European tour. She accompanied the classical group at stages throughout the musical evening while also taking solo turns.

Fans arriving for the show had been able to keep up-to-date with the backstage preparations for the show as the singer posted a photograph of herself posing with Il Divo on social media website Twitter before hitting the stage.  Katherine even had time to tweet a message paying tribute to her fans before her encore saying: "Thank you Manchester You've been epic”.

The tour marks the first time Katherine has worked  with the multi-national group on the road for a string of co-headline performances marking the rise in popularity for crossover classical pop artists.
Me and my guest for the evening found the whole experience to be thrilling and totally memorable. We both said that we would love to see both Katherine and Il Divo again in the future.

For details of the remainder of the tour please click