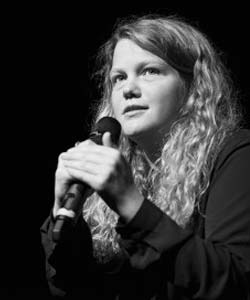 Kate Tempest’s latest record, Let Them Eat Chaos, itches to be consumed in one entire sitting. It’s a portmanteau; a big tumorous depiction of London life at 4:18. Think Mike Skinner's The Streets – their lives cracked apart by the storm that splits the album into each individual’s intimate, isolated life per song, they are brought back together by the final track in a similar way.

Brand New Ancients, Tempest's 2013 book of poetry that won the Ted Hughes Prize for Innovation leaves you rocked, stirred and unmoored - and she manages the same on stage with Chaos. Her narrative captures the desperation of youth in England, the bars she spits intense and relentless.

Musically, Chaos is the follow up to her 2014 Mercury Prize-nominated Everybody Down and, whether tempered by the current political storm, Tempest has something else, and it translates on stage to a performance filled with tension, frustration, and drama.

Tempest performed the album from top to bottom in its entirety- it wouldn’t be appropriate to hear it in any other format. Whilst Let Them Eat Chaos recognises the sense of futility felt by those living in a modern, divided Britain, it simultaneously inhabits  the all-too-relatable tableau of a Friday-night high street, deftly weaving from political and environmental anxieties to our pacification by modern consumer culture. She brings it to life with a blinding life show.

The biggest cheers follow the political call-outs on Europe is Lost, and the final song, Tunnel Vision, ends with a thunderous round of applause that Tempest admitted left her rattled.

She closed the night with a spoken word piece that she has been working on with long-time collaborator & producer of Chaos, Dan Carey. During this piano-accompanied piece, Tempest was silhouetted against a backdrop of warm white lights, issuing a clarion call for the urgent need for “more empathy, less greed”.

This is Tempest at her most life-affirming and intimate; her refrain “there is so much peace to be found just in people’s faces” leaves us with an unerring sense of community and the hope to be found in each other, as well as in the arts.