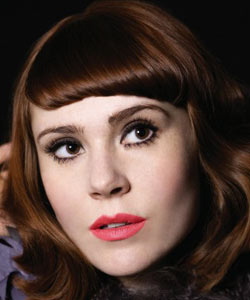 Although in many ways, she has. Quite a lot, actually. Since the release of her second album ‘My Best Friend is You’ in 2010, it seems Nash has been undergoing a quiet transformation.

Gone is the sugar-coated monotonously quirky popstrel who first hit the music scene in the mid-noughties after exploding on MySpace; gone is the happy-go-lucky motown diva of album number two; in their place is a 90s throwback punk chick.

As Nash and her three-piece girl band took to the stage on Thursday, the most immediately surprising thing was that she was wearing a kilt, with a ripped black t-shirt.

The second most surprising thing was that she had a chunky blonde streak in her hair.

The third most surprising thing was her music.

Although she mixed up some of the better-known summery tunes from ‘My Best Friend is You’, such as the bitter-sweet ‘Kiss that Grrrl’, a large part of the gig showcased a new heavier, more garage-like sound.

The set felt a bit uneven, as flashes of the old poppy Nash kept peeking through, only to be stamped out by edgier riffs and shouty lyrics.

By the time she signed off with her newly-released single ‘Underestimate the Girl’, which was written and recorded in just 24 hours, and been widely derided by critics, there was no doubt about the direction her music is taking.

But the crowd at the Deaf Institute seemed to be lapping it up, leading Nash to proclaim her love for the city of Manchester both in person and on twitter following the show.

As Nash said her goodbyes and made her exit the crowd continued to show their appreciation, although some did look slightly confused by the whole event.

Can Nash carry her fans through to this next stage in her career? Let’s hope so.