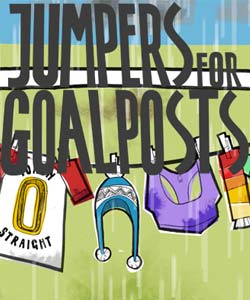 Jumpers for Goalposts is a play about a down on it’s luck LGBT football team with problems on and off the pitch. Written by Tom Wells the play is being produced by Oldham Coliseum and we were there.

It’s unusual to go and see a play with absolutely no preconceptions but that is where I found myself when I went to the wonderful Oldham Coliseum to see Jumpers for Goalposts by hot writing talent, Tom Wells.

The play focuses on LGBT football team, Barely Athletic, who are losing most of their matches and enthusiasm in equal measure. They are only held together by the cast iron will of the plucky Viv played fantastically by Sally Carman (Prisoners Wives, Shameless). It is an uphill struggle for poor landlady Viv as her other team members present her with more than one problem as they battle through the league.

Her brother in law Joe is the token straight of the team and is grieving the loss of his wife and Viv’s sister. Graeme Hawley (Coronation Street) puts in a solid performance as he struggles to find his way through his grief.

Luke played by Will Mytum is the archetypal awkward blossoming gay lad who just needs that last push to come flying out of the closet and live the life he has dreamed of. That push comes in the form of Danny, a good looking, confident young man who Luke Bailey (Ordinary Lies, Waterloo Road) gives just the right amount of swagger to make him sympathetic but not over the top.

However, most good productions have a show stealer and this one comes in the shape of bearded busker Geoff who is perfectly portrayed by Adam Barlow. He is often the comic antidote to some of the more heavier sections and has everyone cheering at the end.

The play is light and greatly paced although does tend to veer into tried and tested storylines instead of using the platform to present something new which would have given it a much bigger lift. The staging and set are second to none, the audience really feel like the sixth team member sat in the changing rooms. However it is the dialogue that at times is genius and has that same truthful humour that the beloved Victoria Wood did so well and has the audience laughing in their seats.

On a cold winter’s night it was definitely worth the trip to see this production for a bit of feel good entertainment. Maybe we could have a sequel following the fortunes of arch rival team, Tranny United. That would be a thought.