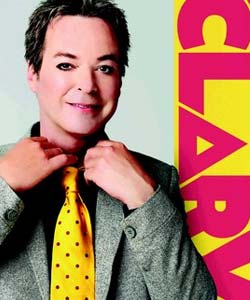 ‘The Joy of Mincing’ was a welcome return to the stage by Julian Clary after his foray into the authorship of children’s books. His act has changed very little since the 1980s, and the near-full Opera House and undivided attention of his expectant audience was proof enough that it doesn’t need to.

The camp ‘ Renowned homosexual and mincer’ (his words not mine) delivers a very personal show, with many references to his life and career. Stories revolving around The Joan Collins Fan Club and Fanny The Wonderdog delighted those familiar with Julian’s career, while those new to the Mincing experience seemed equally satisfied by the humorous tales and flamboyant delivery. Take, for example, the situation in which he single-handedly saved the life of Joan Collins, who may well have drowned in her Infinity Pool in Saint Tropez had he not put down his erotic novel. Whilst he leaves you in no doubt that the majority of these anecdotes are based on true happenings, he deliciously embellishes them enough to make them outlandish and, here comes the key word again, camp.

Julian also had some more serious moments as he opened up to the audience about his recent birthday and the passing away of Valerie, one of his much loved pet dogs. During these more sombre times he presented himself as being very warm and genuine as people hung his every word.

A great deal of the content came to us in the form of Innuendos, ‘’are you receiving me up the rear?’’ he asked the audience in a rather Carry-on film style. I was expecting a largely LGBT audience, presumably as did he, as he gave several references to Canal Street, but the demographic was far-reaching including mature married heterosexuals and many elderly.

Some of his material was derived from his newest vocation, writing children’s books, the polar opposite of his self label ‘ Renowned Homosexual and Mincer’, followed by quite a few shameless plugs for his latest title.

No Julian Clary show would be complete without his ritual humiliation of audience members. Three people he’d selected to receive faux MBEs ( Mincers of the British Empire) were summarily marched into the wings by Julian’s Lesbian Stage hand, Bertha, and dressed up in some of his most iconic costumes, much to the delight of the crowd.

To close the show he treated us to a couple of songs, although he is far from a vocalist, with his usual camp flare, he made them his own, leaving us to exit the theatre wearing big smiles.

The Joy Of Mincing takes a break for the summer and resumes in the autumn. Should you discover that it is coming to a theatre near you, you should take the opportunity to go and see this very funny and interesting personality.