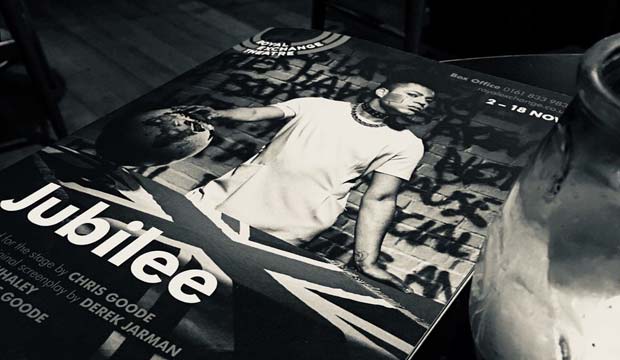 Derek Jarman’s iconic film captured punk at its giddy height: a riot of music, DIY fashion, and every kind of sex – with a little pyromania thrown in.

Now, forty years on, this new stage adaptation of JUBILEE remixes it for the social and political turmoil of 2017.

Marking the 40th anniversary of Derek Jarman’s iconic film, the Royal Exchange’s world premiere of Chris Goode’s re-imagined stage adaptation of JUBILEE is (claims the press release) “sure to appeal to young punks, old punks, and anyone who’s ever wanted to set the world on fire”.

And it does! This wild theatrical experience sets out to shock from the start. It’s rude, loud and leaves nothing to the imagination. Chris Goode’s slick direction causes chaos and ultimate carnage as we follow a marauding girl gang on their killing spree.

Hard-hitting, political and divisive at its 1978 cinematic release, could this idea of a broken, dystopic Britain be relevant today…absolutely. Goode’s adaptation remains faithful to the original, bringing references bang up to date - Trump, Brexit, even Beyonce. The electrifying cast use the auditorium to the max to pack their punch, with a time-travelling Elizabeth I purveying the world below from the first gallery.

Toyah Willcox, who played gang member Mad in the original film, takes on the regal role, interjecting Shakespeare-ially with observations on the modern society being witnessed. Lucy Ellinson is suitable unemotional as Ariel; Tom Ross-Williams and Craig Hamilton show us everything they have; Yandass Ndlovu successfully takes on their first professional appearance after a number of outings with the Royal Exchange Young Company.

But it is Travis Alabanza who leads the accolades with their brash, cocky interpretation of Amyl - part narrator, part accomplice. Travis takes the audience head on, berating late comers and astutely pointing out that there are a lot more empty seats after the interval than before.

For some this will be a challenging evening, especially from the banquettes! For those who wanted to be free at the interval and didn’t see it through, you missed an explosive 2nd half and an iconic performance.