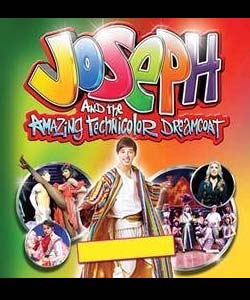 Joseph and the Amazing Technicolor Dreamcoat

A Technicolor Treat, had the audience on its feet!!

On Tuesday evening your Canal Street Correspondent was transported back to Old Testament times to the tribes of Israel and to Pharaoh’s Egypt.  Manchester’s Palace Theatre was in dazzling Technicolor, welcoming Bill Kenwright’s latest touring production of Joseph and the Amazing Technicolor Dreamcoat.

The show has little spoken dialogue; it is completely sung-through. Its family-friendly storyline, universal themes and catchy music have resulted in numerous productions.  Billing this as a “new” production was perhaps not entirely correct, as this show was remarkably similar to the production touring a few years ago, which your Canal Street Correspondent saw in the gentile surroundings of the Buxton Opera House!

This musical with lyrics by Tim Rice and music by Andrew Lloyd Webber, tells the "coat of many colours" story of Joseph from the Bible's Book of Genesis. This was the first Lloyd Webber and Rice musical to be performed publicly.

Originally written as a school production for an assembly, the musical has been extended (mainly by way of reprise, reprise, encore and a mega mix reprise) the show has been stretched from original twenty minute format into a festival of multi-coloured pantomime unashamedly pitched at the under 10’s.  This classic musical playfully retells the Biblical tale of Joseph: the 12th and favourite son of Jacob who is sold into slavery by his envious 11 older brothers after he receives an elaborate coat.

Reality TV stars came good in this production, Danielle Hope - winner of the BBC's Over The Rainbow series in 2010 (then aged just 18), delivers an impressive and performance as the stories narrator.  Lloyd Daniels (ex X Factor 2009) is a capable co-star making his musical theatre debut as Joseph, singing Any Dream Will Do and Close Every Door To Me well and looking more than fine, in little more than a loin cloth.

Excellent support provided by Henry Metcalfe (Jacob/Potiphar) and the formidable Pharoah (Elvis – with pelvis!!) played by Matt Lapinskas.  Add to this inflatable sheep, singing camels, and a motor-cycle chariot, and you have a joyous mix of high-camp, multi-coloured pantomime which will thrill kids old and young alike.