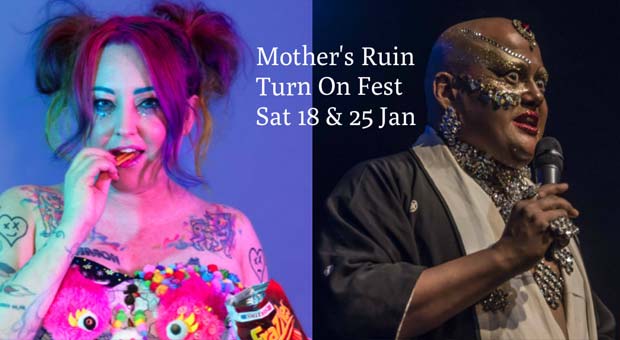 Following the previous Mother’s Ruin evening, Hope Mill theatre hosted a second one, Mothers Ruin: SHOWS on the 25th January, as part of their Turn On Festival. It comprised 5 acts with Jonathan Mayor as the ebullient compère, and gave us performances equally as diverse, if not more so, than its predecessor.

Dressed like a gilded galleon in full sail, Jonathan opened the evening and provided introductions with his unique style – which on this occasion blended equal measures of Mrs Thatcher and Hyacinth Bucket at the local WI. In effect we attended the Jonathan Mayor show with invited guests.

First off we had Rhys’s Pieces, who just might have invented a new Olympic sport: Extreme Lip-Synching, the major elements of which also include rap and an ability to dance well. My favourite was the Nicki Minaj number. It was a short set but we were treated to an even more energetic reprise at the end of the evening.

Next on stage was Barbara Brownskirt, the pop-socked, kagool wearing poet in residence at the 197 bus stop – she also wore a brown skirt and sensible pumps – who gave us readings from her substantial back catalogue. Combining pathos with bathos her delivery was very sharp indeed, and when she removed her kagool to reveal an identical one underneath (twice) we were won over.

The first half closed with Venus Quasar, who shimmered onto stage to perform some original songs to an accordion accompaniment. One of these – about the perils of dating apps, where pictures belie actual appearance, but both parties are now present so why not go ahead – struck a chord with a few in the audience. The final number was an accomplished dance sequence.

After the interval we started again with Claudia Palazzo, who gave us a (literally) dark act. Performed against a video backdrop of Canary Wharf at low tide and with blue police lights on stage, she wielded a knife whilst arguing in broken sentences with an unseen opponent. It was effective, and certainly lived up to Jonathan’s feral description, but left me wondering what I’d witnessed.

The final performer was Joe Sutherland, an established stand-up comedian who took in being born in the north, but then living in Coventry, before ending up in North London. The jokes just came and came, and his lapsing into Franglais – restaurant doesn’t really have a final t, and LGBT is properly pronounced lay-jay-bay-tay – was an indication of his “class-fluid” nature. Some easy political points were scored, but others were more precisely honed and hit the targets well.

As with most of the festival’s performances this was another one-night event, but Mother’s Ruin have numerous events throughout the year so you should be able to catch one.