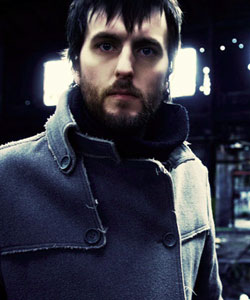 Jon Boden and the Remnant Kings

Jon Boden is a busy man. Besides being the lead singer of the eleven-piece folk group Bellowhead, Jon is also the fiddle half of Spiers and Boden, plays guitar for Fay Hield and the Hurricane party and runs a monthly folk club at The Royal pub in Dungworth,. He also fronts his own band, The Remnant Kings, which is a showcase for Boden’s own work.  His 2009 album ‘Songs From the Floodplain’ imagines a time, not so long into the future, when our society has run out of oil. His songs tell of disused motorways, rusting cars, abandoned factories and shady preachers.

Thursday’s concert at the Bury Met mixed pieces from ‘Floodplain’ with, mostly, traditional folk songs. They were performed by a four-piece multi-instrumental backing band comprised of Boden’s fellow Bellowhead members Paul Sartin (oboe and fiddle) and Sam Sweeney (drums, fiddle and concertina) together with Rob Harbron (concertina, fiddle, banjo and guitar) and Rick Foot (double bass).  They were accompanied by two Edison 1912 wax cylinder players (Eric and Edith) who provided backing vocals at various points throughout the evening.

What a stunning gig this was, full of light and shade with songs of love and murder mixed in with sea shanties, music hall numbers and epic ballads. There were also arrangements of two pop songs that Boden thinks will still be sung after the oil runs out and we have to make our own entertainment. Whitney Houston’s song, ‘I want to Dance With Somebody (who loves me)’ is rearranged as a waltz and Kate Bush’s ‘The Hounds of Love’ is sung accompanied by three concertinas. This latter song segues into the most glorious version of ‘Reynardine’ with Boden’s voice soaring over his own fiendishly difficult fiddle playing.
Other highlights included a powerful version of the ‘Floodplain’ song, ‘When The Walls Come Tumbling Down’, a raucous rendition of the shanty, ‘Hanging Johnny’ and a spooky, ‘Doleful Dance of Death’.  I also liked the jaunty, syncopated, ‘Old Brown’s Daughter’. The jewel in the crown, however, was the first-half closer, a mighty ten minute rendition of, ‘The Rose in June’. This song, about a herring ship caught in a storm resulting in the loss of two men, is religious in tone but also shows the power of song in facing up to adversity. I found it profoundly moving.

The show finished with a beautiful encore of ‘Stardust’ by Hoagy Carmichael, another song the Remnant Kings think will survive the apocalypse. After this the band retired to the bar for a half-hour singaround.  Sadly, I had a tram to catch and could only stay for a couple of songs.

Due to his busy schedule Jon has said that this Remnant Kings tour will probably be the last until 2015! This is a shame. I only hope that he releases the new material on an album at some point. If the band do happen to tour again and you have any interest in great music well played and sung, I recommend that you get a ticket. I promise you won’t be disappointed.