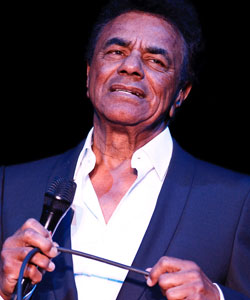 In all of my many visits to the Arena over the years, have never seen an audience as hushed and reverent as the one last night.

There was a pin-drop intensity to the whole experience,with even the applause,although generous,was delivered in a particular style of deference and adoration.

The singer,now 78-years old, is one of those perennial stars whose appeal has bridged generations. He is one of the last of the great crooners, cool enough to coexist with rock and roll, with a flowing vocal style that has effortlessly absorbed fads and fashions for jazz, latin, soul and disco. He may not have had a big hit since Too Much, Too Little, Too Late in 1978 but, with record sales in the hundreds of millions, his live appeal has never waned, and his first UK dates since 2011 have seen him selling out venues more accustomed to big rock bands and chart pop acts.

He doesn’t really appear to sing to the crowd but to himself, projecting a few feet in front of his fixed smile, as if shyly serenading the middle distance.

Immaculately turned out in a sharp grey suit, he held his microphone at chest level, dipping and lifting it in discreet jiggles,a trademark style that has always been a feature of his perfomance and never raised his voice, crooning sweetly as he strolled from one side of the stage to the other.

There were over thirty musicians on stage, a core American band,who in some cases have been with Mathis for over 40 years, supplemented by a wonderful British orchestra, and guided by pianist and band leader Scott Lavender they filled out the musical spaces with a delicacy and restraint that perfectly supported Mathis’s still astonishing voice.

There is a supernatural quality to his singing: smooth, high and fine, like silk gliding over silk. Arrangements shifted subtly from a solo piano base with other instruments adding light tones and shades as songs opened out.Truly a musical smorgasbord.

When acoustic guitars and percussion pushed in underneath for forays of sinuous, jazzy bossa nova, it struck like a bolt of lightning piercing the mood of romanticism.

The whole experience was almost the opposite of the kind of sensational pop spectacles the Phones4u Arena normally hosts.

The stage was set up like a nightclub with velvety drapes gathered at the back, the performers were static (apart from the ever strolling Mathis), with no video feed and no special effects (that is if you discount Mathis’s voice, which has special effects all of its own).

There was just a sustained mood of musical concentration, peppered by the occasional mass murmur of delight as Mathis embarked on a particular crowd favourite from his 57 year career.He somehow turned the Phone4u Arena and its 7000 audience in to an intimate nightclub. A rare quality.

Mathis isnt exactly, chatty in performance,but then again he fills the entire set with song after song from his extensive repertoire.Chat would,with hindsight,have meant that we would have been denied musically.

I have been fortunate over the years to see some of the truly great singers and perfomers,but last night Johnny Mathis possibly became the finest live voice I have ever heard.

If he is ever able to return for another tour,then take my advice and just go.

For more about whats coming to the Arena.