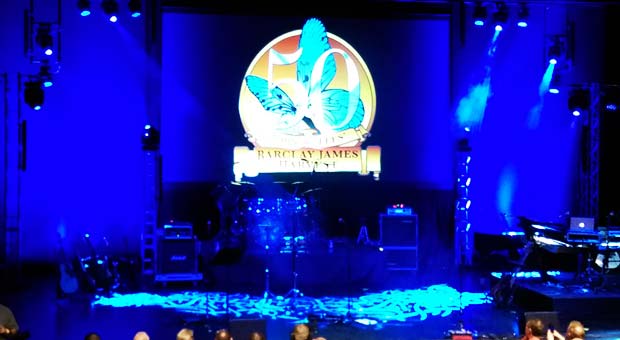 One of the problems about saying to your friends that ‘I’m going to see Barclay James Harvest’ the common reply is ‘who?’

Well that’s sort of surprising considering that they released their first single ‘Early Morning’ in 1968. It was played on Radio 1 by John Peel, who told listeners to ‘expect great things from this band’ and 2018 marks BJH’s 50th anniversary.

Sadly, BJH have never really made the big time here in the UK. Possibly, and unfairly, you could say to John ‘I have all your record’ as the UK chart one hit was ‘Mockingbird’ from ‘Once Again’ released in 1970. However, it was a different story in Europe where the band scored gold records in countries such as Germany and Switzerland for almost every album they released.

Tonight they are playing what seems to be something of a home coming gig, for this Oldham based band, at the RNCM in Manchester. It was a sell-out and much of the audience was made up of the bands family and work colleagues, plus quite a few fans.

They have been performing as John Lees’ Barclay James Harvest for at least 12 years. BJH didn’t as such split, the members, not changed since 1968 had simply gone off to do other projects by 1998.
Two members of the band have now passed into the great beyond, Drummer Mel Pritchard and Keyboard player Stuart Wolstenholme. Les Holroyd went off to work with other established musicians creating several new works.

So tonight we are seeing the latest incarnation of BJH, mostly focussing on the song writing talents of John Lees plus an interesting exhibition of band memorabilia.

With 20 studio albums to their name, the BJH cannon is huge and presents quiet a diverse range of musical styles however, the melodic music is combined with interesting and storytelling lyrics, many of which can be very moving such as ‘Hymn’ with its ‘Yeah’ chorus, something to behold when listened to on the live album Berlin: A concert for the people.

Kicking off with ‘Mr Sunshine’, the B side of ‘Early Morning’ you can hear almost the entire BJH style contained within one track and the group played songs from album after album. Possibly the highlight was when a concert grand was wheeled onto the stage and they performed a melody of some of the best John Lees BJH songs.

This concert also featured personal home movies made by John Lees and many stories from their touring experiences like the time they meet David Bowie. Playing a gig in a Stockport dive club this guy David Bowie, billed as a country singer, was performing attired completely in denim plus a cowboy hat.

At the end of the gig David clearly hadn’t planned any accommodation and asked John if he could crash with him, BJH seemed unsure of this guy and did a runner to avoid him further. However, this was only 6 weeks before Space Oddity was released, so DB hated them...

Anyone, who had or even heard albums such as Gone to Earth, XII, Berlin, Ring of Changes or Face to Face would have really enjoyed this almost perfect performance from a group of 4 excellent musicians playing such an amazing collection of music.

A top notch night held in a great venue, that we sometimes we forget the Royal Northern College of Music, Oxford Rd, Manchester.