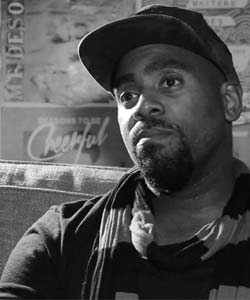 Jodie Abacus at The Deaf Instititute

A Sunday night gig is a tough call for anyone as those back to work blues come creeping in but rising star Jodie Abacus kept them at bay a little longer when he took to the stage at the Deaf Institute this week.

If you haven’t checked out Jodie’s brand of feel good grooves then the time is now to jump on board what is sure to be a ride to stardom.

Abacus is one of those songwriters who makes it all seem so effortless and his brilliant tunes such as Halfway to Mexico, Hot Kitchen and I’ll Be There Friend coupled with appearances at Glastonbury are making huge waves in the music industry.

A totally accomplished and natural performer he can have you dancing one minute and crying the next with refreshingly honest lyrics and performance style, Abacus is most definitely one to watch out for.

Canal St Online’s Chris Park caught up with Jodie in his dressing room to talk performance, writing and Matt Lucas:

1. It’s been quite the year for you from being signed in 2015, what have been the highlights?

Where do I start?  Most of it is on stage telling my stories to the crowd in song form so, you know, it could be anything from Glastonbury to Secret Garden Party to writing and finishing off songs to getting those eureka moments with songs. This year, you know when you’re watching a TV programme and people say it’s a rollercoaster ride that’s exactly what it is, a rocket ship ascending into outer space, that’s what I feel like it’s been.  I feel like my dreams are coming true. That’s how I’ve always lived my life, like it’s my last day so I can appreciate everything and it’s fantastic.

2. Tell me about your sound

My sound is a thread with a common kind of eclectic style that can go off into different kind of genres of music, mainly it’s very honest and it’s very sincere, that’s how I like to start a song with goosebumps.  My music will have influences from the Beatles or the Beach Boys or Prince of a Tribe Called Quest. There’s all kinds of stuff going on there.

Just this massive journey of working hard and continuing to put my head down, persevering, being honest and living my life to the full. Just making stuff happen along the way.

4. What is your writing process?

I normally start with chords then the chords ask me what am I looking for. When you start off with a sound you ask yourself “what is this sound looking for?” in the same way that you approach making a food like a soup or a stew, what does this need, what flavours? Does it need potatoes; does it need carrots, what kind of spices?

It’s like trying to find what the song is saying, if it’s pulling something from your heart then you say, I’m going to sing about this thing. About heartbreak or people who are homeless at the end of my road, what kind of emotion is it drawing out of me and if the goosebumps say go with it then I go with it.

If I feel passionate about something that’s happened I will be in the studio and write about the situation. I believe in space and time to focus and to take a break, live life and then come back and tell the story.

5. Do you ever get stage fright?

All the time. The only reason why I get stage fright is not taking for granted the people who are coming to see me. Music is a powerful thing, someone could come in that door and go out a changed person. I have the respect of my craft and what I’ve learnt and how I deliver my stories, sometimes I relive those moments and they might not be the best moments in the world but I have to remember that someone can go in and come out feeling different and that’s an amazing thing.

6. Do you watch your performances back?

7. What did it feel like when you first saw people singing your songs back to you?

Amazing feeling, an amazing feeling especially when you’re going along and people are getting used to you and then start singing your lyrics, you can’t describe it. It’s priceless. You’re putting pen to paper and then to see people mouthing your words as you’re going through festivals and you think “People are you really listening to this”

8. Where would you like to be in five years time?

I’d like to see myself with the same prestige as Adele has as a British artist or Ed Sheerin or people who are coming through the ranks. I want to be able to know that I could write a James Bond song and be a respected household name, I believe I can do it, I have always had that belief but I want to know if it’s possible.

9. Were you ever tempted by the reality TV route?

No. You’ve got to have a lot of guts to go on those kind of shows but I felt it was never for me. As a singer/songwriter, with those shows, you’re required to have a certain thing about you, I don’t think most of your talent is exposed in those shows and I think when you go on those shows, you shoot yourself in the foot for the rest of the industry.

10. What can we expect from your forthcoming album?

Fun.  Sadness.  Anger.  Everything you can fit into a journey of life. The tone of the album will have a lot of joy in it because that is the type of person I am.

Yes I want to tour everywhere.

12. Matt Lucas named your song as his favourite of the year, how was that?

I’m a big fan of Matt Lucas ever since Shooting Stars and he has mentioned it before, about three times over the course of a year and recently he mentioned it again and its amazing. It’s just a nod and it’s amazing that someone out there who you’re a fan of is not afraid to say I like this. Some celebrities are afraid to say certain things or admit certain things are cool.

I’ve never met him. I asked him to come to a gig and he couldn’t make but if I’m in LA he will come to a gig.

Jodie’s album will be out in 2017, for more information please visit jodieabacus.co.uk