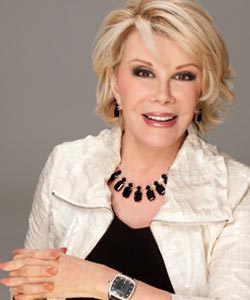 In her 80th year, the undisputed Goddess of comedy Joan Rivers shows no signs of slowing down: she is quick to explain that working  is what keeps her active, healthy and sane.

The crowd is a mixed bag, but a loyal bunch. We gasp, we look at each other in blissful horror, but mostly we laugh and our ribs hurt. Joan is relentless: there is not a second's let up and she is in the form of her life. She orders 'the gays' to the front, the lesbians to the back, Chinese women, thin people and the handicapped out; everyone else is allowed to stay!

She plays a set of about 75 minutes, but everyone is so disappointed when it's over. We would gladly see it doubled. The good news is we are under no illusions that Ms Rivers will retire anytime soon!

A fantastic evening and the perfect performer to send ripples and shock waves through the core of the sometimes static and rigid (though stunning) Bridgewater Hall.