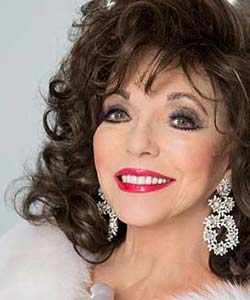 Joan Collins on Tour at The Lowry

OK let’s get this straight, my name is Chris and I am a Joan Collins fan. I am from the generation who spent their formative years watching Dynasty, to us Joanie has an almost mythical quality.
So imagine the hushed excitement in Salford’s Lowry Theatre as we all waited for her new show entitled Unscripted.

I’ve been to see her Evening with Joan tour a couple of times but this was a different affair, she was at the mercy of our unfiltered questions. Brave some might say, crazy others would but luckily there weren’t any truly horrific moments.

Aided by her ever faithful fifth husband Percy, Dame Joan appeared on the stage in all her finery and regally sat and took questions from her subjects. At the beginning it was made clear that she wouldn’t answer questions on certain subjects such as Brexit or the US Presidential Elections. We won’t think about her political leanings, let’s not ruin a perfectly good night. We were also warned not to go into too much gushing about how much we like her.

She has received bad press about this rule but having been to a similar evening with Roger Moore and listening to man, who clearly rarely sees daylight, harping on about all the films he loved and why, I can understand the need to limit the worship. It’s awkward and unfair to others who want to ask a question.

So with the rules set, Joan and Percy settled in for a Salford grilling. It was quite refreshing to hear one of the most interviewed women in the world answer things that she hadn’t been asked before.

So what nuggets did we glean?
The obligatory beauty regime question was asked, it’s understandable, the woman is 83 and doesn’t have the Hollywood death mask resulting from too many trips to the surgeon. She gave us a tip which she got from Paul Newman, who, she confided, could drink most people under the table, he would submerge his face in ice for five minutes every morning.

Naturally Joan uses cotton pads and ice but Percy says after 14 years he still hasn’t got used to the yelp every morning. I can only assume there is a shortage of ice in the Greater Manchester area this morning as everyone murmured that they were going to try that.

Her memory bank reads like a Who’s Who of Hollywood. She gave us a wonderful memory of working with Gene Kelly on her 80s mini-series Sins when they were on the River Seine and a gust of wind took her hat and his toupee off down the river and they had to shove a hat on his head to complete the take. She met Marilyn Monroe at one of his parties who struck her as a lonely figure and warned her against the wolves of Hollywood.

However it was when she was interacting with the audience that she really came to life. One lady asked for relationship advice, she has been with her partner for 23 years and engaged for 17 but he wouldn’t marry her, what was her advice? “Leave him” said Joan with more than a touch of Alexis.

She was also asked about her memories of appearing in Badly Drawn Boy’s video for Spitting In The Wind. The whole experience seemed to have confused her, she realised she’d never appeared in a music video and thought she’d give it a whirl but was obviously a little nonplussed from the whole thing.

One audience member asked her what she would have done had she not acted. There had been a few choices ranging from a detective, she loved her detective set she was given at Christmas, to writer, fashion designer to interior designer.

She told us that a house should always be changing and she is regularly moving things around in her homes and getting Percy to move pictures. In terms of fashion design, she still designs her own outfits including the first outfit she wore that very evening.

But the night definitely built into a finale for me as at the very end she answered my question. I turned into a total fanboy and with heart pounding I asked her if she ever channelled Alexis in her personal life. She told us that she regularly channels Alexis at airports where she gets the pat down every time she travels which definitely seemed an annoyance, especially as Percy never gets stopped much to his glee.

With that she was gone. It’s a brave thing to open yourself up to totally unfiltered audience questions but if anyone can handle it, it’s our Joan and with this being her last ever tour, it was a great gift to fans who had supported her for many decades.