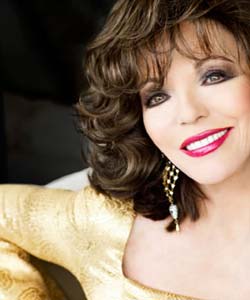 It’s very hard to accept that Joan Collins, is soon to be 80.That said, she shows no sign off taking it easy. Last night at The Lowry, Salford, she took an enthusiastic and very gay audience, on the fascinating journey of those 80 years. The first act laid the foundations of her career as she regaled stories of her family background and influences.

After making her stage debut in A Doll's House at the age of 9, we heard how she trained as an actress at the Royal Academy of Dramatic Art (RADA) in London. Moving on after eighteen months at the drama school, she then signed to an exclusive contract with the Rank Organisation and appeared in various British films. As the narrative continued, we were treated to lots of visual references on the large screen behind her, whilst she moved effortlessly from one side of the stage to the other, taking short breaks in a large, throne-like chair. Dressed simply but stylishly, in tight, sequined, legins and very expensive looking shoes, Ms Collins regularly made us laugh at her tails of career highs and lows, all punctuated with wonderful irony and just the occasional 'dig'. As she left the stage at the end of the first half, the theme tune to Dynasty left us in no doubt what was next on the list.

The buzz in the bars during the interval, confirmed that pretty much everyone was loving the show. "She's camp", et al seemed to be the general consensus. The second half began with a change of outfit (then you would expect nothing less) into a stunning evening gown, accompanied by, yes, you guessed it, the theme to Dynasty.

It was 1981, when Ms Collins landed the role of Alexis Carrington Colby, In the long-running 1980s television soap opera Dynasty, for which she is probably best known. Although there were many other roles both on stage and screen including those fantastic and memorable commercials for Martini with Leonard Rossiter, it was, however, Alexis that made her a global star and we loved the sequence of legendary scenes that again filled the screen behind her.

Throughout the evening Joan Collins reminded us of just how many major stars she has worked alongside in her most illustrious of careers. Joan showed tremendous humility at all times, focusing as much on her 'Turkey's' as she put it, as well as her finest moments.

Talented, witty, engaging and loads of fun all sum up 'A night with Joan'.

For more about Joan.