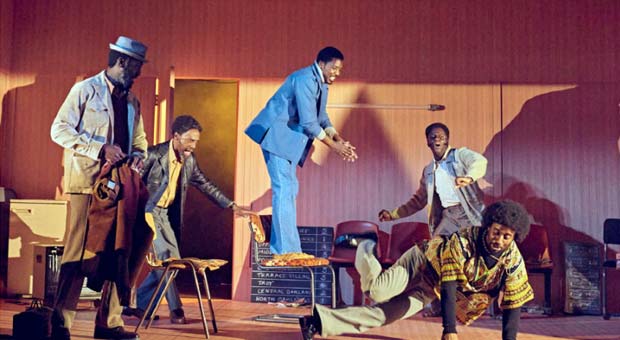 The setting for August Wilson's modern classic play, Jitney, is set in a run down taxicab office in a deprived suburb in 1970s Pitsburg.

It follows the hectic drama of eight black African American men  and a woman as their fragile and threatened lives unfold.

At its heart is Becker, a principled and hard working leader of a crew of taxi drivers who are mostly flawed and disfunctional.

The Oldham cast are excellent in portraying the marginalised and believable characters who are surviving between jobs, jail and post Vietnam trauma.

The play has long rants and bouts of worried chit-chat that would benefit with some pruning. Some whole scenes could be removed  without loss to the overall narrative.

The language is raw and harsh and reflects its time and place. The Oldham players commanded convincing accents and emotions throughout the play.

There are many poignant and intense scenes. It is a study of male pecking order, class, race and desperation.

Wil Johnson who plays Becker gave an outstanding performance and the cast were believable in each of their challenging roles.

Details and tickets are available via HERE