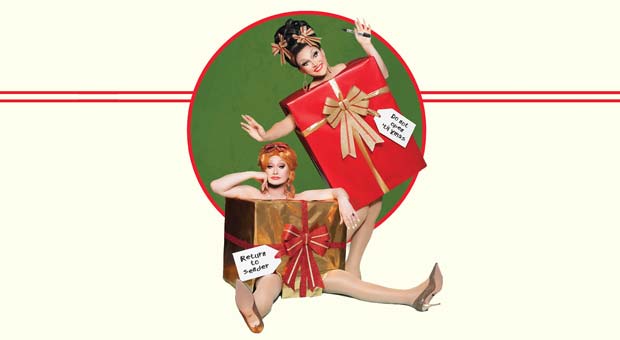 Jinkx Monsoon and Ben delaCreme at The Palace theatre

With the 1st December having landed the countdown to Christmas has finally begun and Jinkx Monsoon and BenDeLaCreme are in town to spread a little Christmas cheer.

The legendary stars of RuPaul’s Drag Race produced and wrote ‘All I want for Christmas is attention’ and attention is certainly what they got. These two queens packed out the Palace Theatre with fun, festive cheer, more than a sprinkling of naughtiness and what is actually a fairly serious set of messages intermingled among all the laughs and fun.

In a number of solo performances and duets the two do their own take on a number of Christmas classics with a little help from DeLa’s NanaNog who has some interesting advice for how to spread the spirit of Christmas to Jinkx Monsoon. The show takes a satirical approach to the idea of tradition and makes some valid points that tradition doesn’t necessarily equate to good. The Christmas or ‘holiday season’ means a lot of different things to a lot of different people. I think we all can relate to that particular relative who makes those Christmas dinners slightly uncomfortable but that’s Christmas.

The audience were generally in a state of laughter or near hysterics all the way through. The comedy at points is quite dark but it never crosses the line and the video segments were fantastically put together. Maybe next Christmas tour the two will have found a sponsor who doesn’t have questionable ethics!

The two queens made the show relevant to a British audience and its great to see DeLa on stage. Having seen a number of RuPaul queens it is a delight to see the elusive DeLa taking to the stage. She has a legendary status on the show after her self elimination on All Stars and she certainly doesn’t disappoint. Jinkx Monsoon is just a pure comedy genius.

There were a small number of technical issues with lighting and the microphones but none of this mattered as the two queens made the most of it in the best possible way. In some ways these minor issues well fit into what was a very tight production!

If you want a slightly different take on the festive period and you’re a fan of these two queens this was definitely one not to miss.