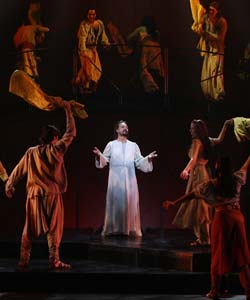 Jesus Christ Superstar exploded onto the musical scene in 1971 - stunning audiences and changing the face of musical theatre forever. Tim Rice and Andrew Lloyd Webber’s rock opera tells the story of the last seven days in the life of Jesus through an extraordinary, groundbreaking score. As compelling today as it was at its inception over forty years ago, Jesus Christ Superstar has some of musical theatre’s most legendary songs from I Don't Know How to Love Him, Everything's Alright, and Gethsemane through to, of course, Superstar.

Leading performer Glenn Carter is set to return as Jesus, a role he has played in the West End, on Broadway and on film.

Musical theatre star Tim Rogers, whose theatre credits include Carousel, Whistle Down the Wind, Jersey and the title role in Jekyll & Hyde at the Union Theatre, will play Judas Iscariot, while X Factor finalist Rachel Adedeji stars as Mary Magdalene direct from the UK and European tour of Thriller Live.

This is the first time I had been to see this production and I had been looking forward to it for some time.  I was not disappointed in the slightest.  It is a loud rock opera that grabs your attention and pulls you into the story.

The set design is over powering and demanding, creating a brilliant dramatic effect and feel.  You will be immersed in the scene as it dominates the audience.

The cast are truly brilliant, the musical power of their voices as they belt out rock tunes is impressive.  They show true emotions in their performances and have you hooked right through to the end.

The orchestra provides the perfect instrumentals and heavy beats, they help add to the atmospheric conditions and have your heart racing and dancing with some of the more intense and dramatic scenes.

If you have never seen Jesus Christ Superstar before, it is most definitely worth going to see.  You will not be disappointed!  It is one production that has lasted for many years and it is no wonder why!

Jesus Chris Superstar is on at the Palace Theatre, Manchester until 18th April 2015.