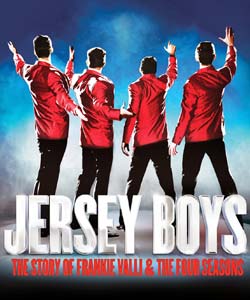 It really is hard to write a review for The Jersey Boys with out using the usual puns and cliches of "oh what a night". However it is with out a doubt the best production that I have see come to Manchester. Even before Sam Ferriday, Stephen Webb, Matthew Corner and Lewis Griffths took to the stage at The Palace Theatre as The Four Seasons there was a real buzz from the audience and it was clear that we were about to witness a true piece of musical gold.

The story of the rise of The Jersey Boys is directed by Des McAnuff and it hardly pauses for a breathe, charting the ups and down of fame set to a soundtrack from the jukebox era. The cast excel in recreating the famous tunes with the crowd loving their renditions of Big Girls Don't Cry and Sherry. The crowd in some parts were wild with excitement and there was certainly a party atmosphere throughout the show climaxing in a standing ovation and massive singalong medley as an encore.

The Jersey Boys is more than just a musical tribute but a fantastic story told through the amazing script writing of Marshall Brickman and Rick Elice. You really go on the rollercoaster through the history of the band through family issues, mafia connections, addictions and personal issues. The story is amazing and vocally those harmonies are sensational.

Opening night for the boys had it's own drama with Tim Driesen being ill and Matthew Corner having to stand in as Frankie Valli. However you would never have known as the performance was flawless, a credit to the cast and production team.

So there is nothing else to say other than The Jersey Boys is a class act, telling one of the most amazing showbiz stories of all time to a soundtrack that will get you on your feet and singing for days.